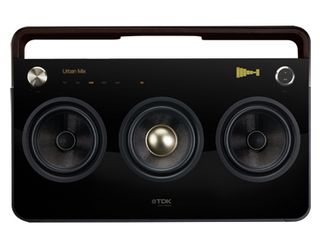 TDK has revealed its latest line of high-end designer boombox music players, leaning heavily on the fashion's current penchant for all things '80s.

Ahh, the '80s. Cruising the town in our shell suits, boombox hiked up on our shoulders so we were never without a soundtrack to our impromptu breakdancing battles. Good times, good times.

With our aching joints and creaking hips we can now relive those glory days – thanks, TDK! Tapes may be dead but long live the boombox!

There are two boomboxes on the cards and they're both lookers, with a glossy retro feel.

The three-speaker affair has a 6-inch subwoofer and an equalizer to give your music a "visual heartbeat". You can dock your iPod or iPhone via the USB cable, or kick it old school with a bit of FM/AM radio.

There's also a line-in connection for your guitar, should you be so musically inclined, and you'll be able to pick it up for £499 in the UK.

But that's not all

Also announced are the TDK Sound Cube which is a compact version of the boomboxes for easy portability (yours for £299), and the ST800 High Fidelity on-ear headphones with an in-line equaliser for super-control over the music, with UK pricing set at around £249.

There's not a great deal of time to scour eBay for the perfect shell suit before the UK release date of February 2011.