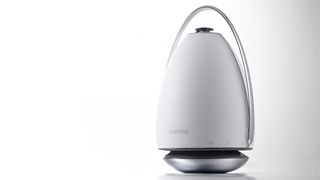 Behold: the future of audio

Samsung will introduce a slew of futuristic-looking new audio gadgets at CES 2015, including 360-degree speakers and more curved soundbars.

The WAM7500 and WAM6500 speakers, as they're called, look like alien eggs - or something from the video game Portal - and use "ring radiator" technology to project sound in 360 degrees.

The speakers were developed in part at Samsung's audio lab in California, the company said.

Curved soundbars for your curved TV

Next Samsung plans to show off more of the curved soundbars it first introduced in mid-2014.

They'll add 8500, 6500 and 6000 series designations to the existing 7500 series soundbar, for a total of four different models that range in size to match Samsung's various curved TVs.

The 8500 has improved sound quality as well, with 9.1 channel sound and additional side speakers that sit at either end.

Samsung says these products and others will be featured at CES 2015, so keep an eye out once TechRadar is at the show next week.