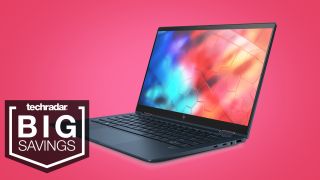 Black Friday is now well behind us, but that doesn't mean HP is stopping the deals, with its Green Monday sale providing some seriously impressive price cuts, including a huge $1,000 off the HP Elite Dragonfly laptop.

This is a powerful 2-in-1 convertible laptop that’s both incredibly light – at under 1kg – and long lasting, thanks to a battery that can go over 24 hours on a single charge.

Not only is it incredibly light, but it’s also incredibly durable as well, meeting the requirements for the MIL-STD 810G military standard.

If that's still a little too pricey, HP has also cut the price of a number of its laptops and PCs for its Green Monday sale, and we've listed some of the best below.

HP Elite Dragonfly, Intel Core i5, 8GB, 256GB: $1,875.25 at HP
Save an incredible $1,000 of the price of HP's new Elite Dragonfly, which is one of the lightest laptops in the world. Not only is it incredibly light, but it's also very powerful as well.View Deal

HP Spectre x360, Intel Core i5, 8GB, 256GB: $729.99 at HP
This is a great offer on the HP Spectre x360, one of our favorite convertible laptops. With an Intel Core i5 processor, 8GB RAM and a 1080p touchscreen, this is actually cheaper than in HP's Black Friday and Cyber Monday sales.View Deal

Fancy some more savings? Check out our pick of the best laptop deals in December 2019.