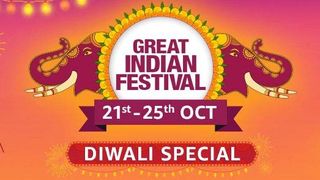 Amazon India is hosting a Diwali Special sale ahead of the festivities in the country. The last leg of its Great Indian Festival 2019 sale has kicked off from October 21. The e-tailer recently concluded its two sales which went live from September 29 in India. According to Amazon, the four-five day sale was its biggest ever and attracted shoppers from over 99.4% Indian pin-codes.

Amazon Great Indian Festival Diwali Special sale will go on till October 25, just two days before the auspicious day of Diwali in the country. As always, Amazon India offered early access to the sale for its Prime members. The sale began from noon on October 20, giving a 12-hour lead to Prime subscribers!

During the sale, Amazon will offer deals on a variety of selection across different catalogs like smartphones, laptops, cameras, large appliances & TVs, home & kitchen products, fashion, consumables such as grocery & beauty and consumer electronic products.

Best deals and offers on smartphones: Upto 40% off

Amazon is offering a 1-year free screen replacement offer as well which will be applicable on certain products.

During the sale, mobile phone cases, covers, screen protectors, cables and chargers will start at Rs 99, power banks available starting at Rs 399 and upto 70% off on Bluetooth headsets.

Read our review of the OnePlus 7T here

Samsung Galaxy M10s is an entry-level budget smartphone that features a 6.4-inch AMOLED screen, comes with a dual-camera setup with an ultra-wide lens with a 120-degree field-of-view.

Vivo U10 is a budget offering with a 6.3-inch HD+ screen, Qualcomm Snapdragon 665 to boot with a 5,000mAh battery that supports 18W fast charging and triple camera setup that looks versatile on paper.

Xiaomi's most affordable smartphone, the Redmi 7A is available at ₹4,999 during the Great Indian Festival sale 2019. It features a 5.45 HD+ screen, is powered by octa-core Snapdragon 439 processor with 2GB RAM and 32GB storage and has a 12MP rear camera. The phone comes with a 4,000mAh battery.

Amazon is offering an additional ₹500 cashback in the form of Amazon Pay balance.

Read our review of the Redmi 7A

Xiaomi Redmi 7 features a 6.26-inch HD+ screen and is powered by Snapdragon 632 chipset. The phone has dual cameras on the back consisting of 12MP primary and 2MP secondary depth sensor. It comes fitted with a 4,000mAh battery and runs on Android 9.0 Pie-based MIUI.

Read our review of the Redmi 7

Apple iPhone XR is retailing for Rs 44,999 during the Amazon Great Indian Festival and is a great deal even if you don't include the additional bank discounts and cashback offers. The phone launched at a price of Rs 74,000 in India, so it's currently at its best price and is a great value for money offering.

While the jury is still out on whether the POCO F1 was a one-time deal for Xiaomi as we're yet to hear anything about the POCO F2. Nevertheless, the POCO F1 is now selling at a mouth-watering price during the Great Indian Festival sale 2019.

The phone still packs in enough punches for the price it's being offered at. The 6GB RAM variant of the phone with 128GB storage is up for grabs starting at Rs 15,999. Amazon is offering additional ₹1,000 cashback as Amazon Pay balance on purchase of this phone. So, effectively, the POCO F1 will cost you Rs 14,999 for the base variant.

Read our review of the POCO F1

LG W10 is a budget centric offering by the company featuring a 6.19-inch HD+ screen, dual cameras on the back and is powered by MediaTek P22 octa-core chipset. The phone has a 4,000mAh battery capacity and runs on Android 9.0 Pie.

In addition to the primary 64MP camera, there's an 8MP ultrawide lens and a 5MP depth sensor. On the front, there's a 25MP camera housed inside a u-shaped notch for selfies. The phone comes with a 4,500mAh battery with support for 25W fast charging.

Apple MacBook Air older generation has received a price cut and is now available at Rs 54,990 during the sale on Amazon India. This model is powered by Intel Core i5 dual-core processor with 8GB RAM and 128GB storage.

The latest MacBook Air with 13.3-inch Retina display is on a flat 10% off. It packs in 8th generation Intel Core i5 processor paired with 8GB RAM and 128GB SSD storage. The new MacBook Air features stereo speakers and can provide upto 12 hours of battery life on a single charge.

It comes in three colour options- Silver, Space Grey and Gold. ICICI debit/credit cardholders are eligible for an extra discount of upto Rs 2,000.

This Legion gaming laptop comes fitted with NVIDIA GTX 1650 graphics card and is powered by 9th generation Intel Core i5 processor. Legion Y540 comes in several different storage configuration options and starts at Rs 58,990 for the model with 512GB SSD.

Best deals and offers on electronics

As part of the new launches, OnePlus TV with 55-inch 4K screen and 50W eight speakers will be up for grabs during the festival sale. Amazon is also offering upto 50% off on smart TVs from brands like Samsung and Xiaomi.

Xiaomi's smart fitness tracker now comes with a colour AMOLED screen, upto 20 days battery life, real-time heart monitoring, watch faces and activity tracker. During the sale, the Mi Band 4 will be up for grabs at Rs 2,299. ICICI debit/credit card users can get upto 10% additional discount on it as well.

Sony's flagship noise cancellation headphones WH-1000XM3 are available at a brilliant price of Rs 20,490. Loved by audiophiles, the 1000XM3 has received Rs 6,000 off over its usual retail price of Rs 25,990. The headphone is our top recommendation for people looking to grab some great deals on audio products.

Check out our Sony WH-1000XM3 Headphones review for more details.

Mulo is a fairly new audio company in the Indian market and their products offer a great price to value ratio. The Wonderloop 500 is a wireless neckband earphone that's IPX7 certified and has a call vibration feature that alerts the wearer about incoming calls even when it's not hooked to the ears. It also has a CVC 6.0 noise reduction microphone which aims to provide a clear sound by negating the background noise.

These wireless earphones are originally priced at Rs 2,499 but during the sale you can grab them at Rs 1,349, saving Rs 1,150 from the ongoing deal.

The newly announced OnePlus TV Q1 series is on sale during the Amazon Great Indian Festival and is priced at Rs 69,900. However, Amazon is offering an additional discount of Rs 2,000 on payments down via Amazon Pay. This effectively reduces the price of the OnePlus TV Q1 to Rs 67,900.

The Mi LED TV 4 Pro by Xiaomi comes with the tag of being one of the world's thinnest LED televisions at just 4.9mm. It features a 4K UHD 55-inch panel with minimal bezels and supports HDR playback. Audio is handled by Dolby + DTS-HD tuning and the TV is powered by quad-core Amlogic processor. It runs on Android TV with Patchwall UI for real-time content suggestion.

The Mi LED TV 4C Pro is one of the most affordable Android TV in the market and during Amazon's Great Indian Festival sale, it is retailing at a discounted price of Rs 11,999.

It runs on Android TV & Xiaomi's own PatchWall OS with built-in Chromecast and a resolution of 1366 x 768 pixels.

DJI's latest handheld smartphone gimbal is up for grabs at Rs 7,990 during the sale on Amazon India. Picking up from the Osmo Mobile 2, the third version in the gimbal series brings active track 3.0, hyperlapse hype and has a 3-axis stabalization system in place to reduce shakes in video. It weighs around 405 grams and can be easily carried along.

Some of the combo deals include Echo Dot with a free smart Bulb, Fire TV with Echo Dot and a smart Bulb, Echo Show 5 with Xiaomi Mi LED bulb, among others.

Amazon's Alexa powered smart display is up for sale at just Rs 20,999. The deal also includes an Echo Dot and Phillips Hue White Ambience bulb, both of which can be paired with the Echo Show to enable a connected home.

With this deal, consumers save more than Rs 9,399 on Echo Show combo and couple it with bank offers to get additional discount.

Amazon's most affordable smart screen with Alexa is retailing at Rs 5,499 during the Amazon Great Indian Festival sale. The device is priced at Rs 8,999 and has received a discount of Rs 3,500.

The Echo Show 5 features a 5.5-inch screen with speakers and is powered by Amazon Alexa assistant. The smart display can be controlled by voice commands and also supports audio & video playback. It can also be paired with compatible smart devices and completes your smart home setup.

During the sale, Amazon is bundling a Xiaomi Mi LED Bulb with the Echo Show 5 which is priced at Rs 5,998. This combo was originally priced at Rs 10,498 and buyers will save Rs 4,500 with this deal. You can check it out here.