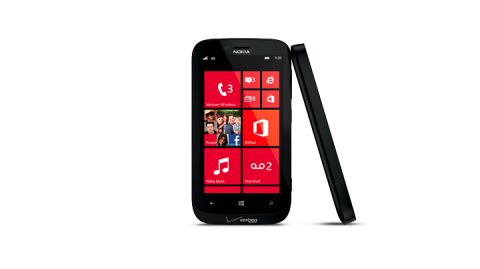 Nokia has a handful of Windows Phone 8 devices ready to hit the market, but only one of them is designed exclusively for Verizon's big 4G LTE network. Introducing the Lumia 822. It may not be as colorful as the Lumia 820 or 920, it gets plenty of style out of those Windows Phone 8 Live Tiles, and some neat Nokia apps.

With their bright hues, it's easy to confuse Nokia's Lumia 820 and 920 with the competition, the Windows Phone 8X and Windows Phone 8S by HTC. Not so much with the 822, which will be available in more muted shades of black, white or gray.

It may not be as flamboyant as some Windows Phone 8 devices, but there's plenty to like about it, not to mention Verizon's rock-solid 4G network. Let's dive in.

Sure it looks slick, but what's on the inside? The Lumia 822 has a peppy 1.5GHz Snapdragon processor, the same one you'll find in Samsung's Windows Phone 8, the Ativ S. Being a dual-core, it shouldn't be too much of a drain on the phone's 1800 mAh battery. Like the Lumia 920 and the Windows Phone 8X, the 822 will also support wireless charging. There's 1GB of RAM, and 16GB of storage with the option of microSD expansion.

When it comes to branding, HTC may have Dr. Dre's Beats Audio, but Nokia has a pioneer from an even older school, Carl Zeiss. The camera company named after the 19th century optical expert has been working with Nokia to make headline-grabbers like the 41-megapixel Nokia 808 Pureview. The partnership continues with the Lumia 822, which has a more reasonable 8-megapixels and dual LED flash.

Those Windows Phone 8 Live Tiles really come to life on the screen, especially against the more muted phone bodies we saw on display.

The Lumia 822's plastic body is a friendly reminder that this is a somewhat mid-ranged device. We're never crazy about overly plastic-feeling devices, and that's unfortunately where the 822 falls. Unlike the pleasantly rubbery Windows Phone 8X and 8S, it's even a tad brittle.

A lock button, volume rocker and the signature Windows Phone 8 dedicated camera button are all found on the right side.

It does have one major advantage over the HTC competition, a far more open design.

Like all of Nokia's Lumia phones, the 822 has backplates to swap. Available in black, white and gray, you can mix and match, giving it a lively two-tone look. Some backplates provide wireless charging support, which gives the phone a marginally thicker body.

Those removable backs also mean you can get at the battery. Right nearby you'll find the microSD slot, which can take an additional 32GB of memory.

In addition to the onboard software and the suite of apps available for Windows Phone 8, Nokia has put some software on the Lumia 822 that will help you, say, find a cup of coffee with turn-by-turn directions.

Nokia City Lens is a fun combination of Yelp-style recommendations and augmented reality app. After choosing from various categories for nearby destinations like food, hotels or sights, holding the phone in portrait mode gives you a list of adjacent businesses. Turning the phone to landscape mode uses the camera to provide an AR view, guiding you to nearby locations. The 822 was quite snappy transitioning between the two modes. Just don't walk into any walls while using it.

The Lumia 822 is quite the mix of looks and specs. Under the hood, it's got some real power, especially if its price point turns out to be truly mid-ranged. That 1.5GHz dual-core is nothing to sneeze at, and with 16GB of storage with the option for an additional 32GB via microSD, the 822 is in the top tier for space on a Windows Phone 8 device.

As far as looks go, it has a nice appearance in black and white, but we wonder why Nokia didn't throw anything brighter into the mix. This is a Lumia, is it not? Also, we weren't fans of the plastic shell aesthetic, and 800x480 feels like a rather low resolution.

The final feather in the 822's cap is Verizon's 4G LTE network, which is some of the widest and fastest service in the U.S. We look forward to putting both the hardware and the network to the test in a full review.