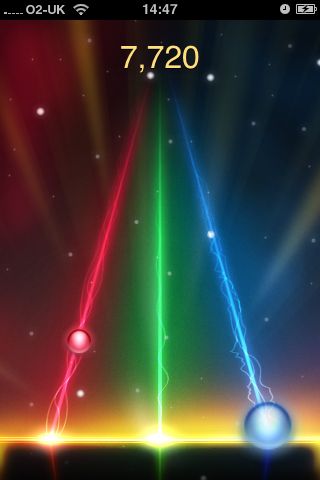 Tap Tap Revenge on the iPhone

If you know Guitar Hero or Dance Dance Revolution, this will feel familiar. It's nowhere near as sophisticated, but it's nevertheless fun. The idea is that you tap along to the beat of a song, tapping the correct point in the screen where the bubbles dropping down the three coloured strings hit the bottom of the screen.

There are four different difficulty levels, but even the easy level proved tricky enough for us. On the single-player mode, as well as tapping the screen you have to shake the phone left/right and up/down. The two-payer mode is great fun too, as you're given targets at either end of the screen for two players to tap on; the iPhone 3G's curved back means it rattles a bit too much on the tabletop, but the first-generation model is just fine!