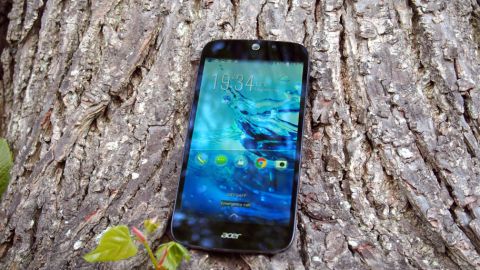 The display on the Acer Liquid Jade Z was never meant to measure up to flagship rivals such as the Samsung Galaxy S6 or the Nexus 6, and yet this does not detract from its quality.

Gone are the days when simply having a 720p display at this price bracket was enough, the likes of the Moto G 2013 have changed the game considerably. Luckily, the screen is an area where Acer has been hard at work.

At 5 inches, and with a pixel density of 294ppi, the IPS LCD on the Liquid Jade Z is great for reading on the go, as well as for watching movies. For an LCD screen, the colours on display are vivid, and, being IPS, the viewing angles are quite good. When viewing content from extreme angles, there is a little dimness, but everything remains clear.

Acer has repeatedly boasted of the 'zero-gap' technology used in the creation of the Liquid Jade. Utilised by the likes of Apple for years, this essentially means that the panel is moved as close as possible to the outside glass, meaning that there is no air in-between. This frequently helps to improve contrast, and I generally found this to be the case.

With plenty of space in which to view content, yet remaining comfortable to use in one hand, for the price level, this is almost a class-leading screen. To find significantly better performing panels, you would need to spend at least an extra £100. Acer has accomplished something quite nice here – in this category, I found the Liquid Jade Z to be a very strong performer.

So what makes the Acer different to anything else? Let's have a look.

Though the Liquid Jade Z technically comes running Android 4.4 KitKat, this might not be apparent on first appearances.

As with every other manufacturer producing Android phones, Acer believes that it can have a better go at Android than Google. Sometimes this kind of confidence is well-founded; with the likes of the One M9, HTC proved that Android could be altered and still remain a pleasure to use. Unfortunately, Asus falls into another category, like so many others before it.

When using the phone, the general colour palette is the first thing that seems a little off, with radioactive greens dominating. Adding to this sense of discomfort is the enormous, telling, 'Acer Suggests' widget, which loudly recommends a large selection of rubbish apps and services.

Not that Acer waits for you to download them, however. The Liquid Jade Z comes loaded with a great deal of bloat, not exactly inspiring when the in-built storage is only 8GB. Games such as Puzzle Pets and Real Football 2015, along with apps such as Livescreen, Booking.com and 50+ free games come pre-installed, and are sadly impossible to remove without rooting (not recommended).

In an age when Google is making strides to improve the general state of Android skins, Acer feels caught in the past, and maybe unwilling to catch up. Installing the Google Now launcher makes the whole experience of using the phone a great deal more pleasant, and is what many will likely want to do upon using the device for the first time.

Some of the pre-installed apps offer some useful functionality. The in-built battery saver app and System Doctor help to improve battery performance and memory management respectively, while the native flashlight app means that there is one less thing to download.

Acer also allows 'floating' windows, essential windowed apps that can be moved around on screen while in use, theoretically making for an improved multi-tasking experience. On a screen this size, however, while the gesture is appreciated, it is effectively useless.

Given the dimensions of this device, there can be no doubt that the Liquid Jade Z is primarily aimed at a younger audience than, say, the Doro Liberto series. And, of course, what does the average yoof of today like more than an impromptu rap battle, accompanied by bangin' beats?

With the effort being poured by Acer into the audio capabilities of this device, this would certainly appear to be their reasoning. Coming equipped with DTS surround sound, on paper, this phone certainly has its rivals beat. High-quality audio chops are typically the domain of high-end smartphones such as the LG G3, or HTC, which has made a great deal of its 'Boomsound' on such efforts as the One M8.

Despite whatever pretensions Acer has to high-definition audio, I generally found that the Liquid Jade Z simply does not cut the mustard. The circular speaker may give the impression of 'otherness', but it is rear-firing, and business as usual.

The first thing that any committed audiophile will take notice of is the complete lack of a native-music app, simply titled 'Music'. This took me by surprise, and it was only by searching the app list thoroughly that I found 'abMusic', the confusingly titled alternative.

Theoretically, this ought to allow integration with Acer's cloud service, along with the rest of the 'ab' suite, but the app frequently failed to even detect the music stored on a normal Micro-SD card. As such, I stuck to Spotify.

Though through headphones (much as with any smartphone these days) the sound was acceptable, through the rear-firing speakers I failed to achieve anything like acceptable volume for most situations. Competing with a shower, the speaker was completely drowned out. The sound output is generally acceptable, for listening to music alone in a padded room, otherwise it is a reasonably poor effort.

Given that most smartphones have one thing in common, in that they are almost uniformly a bunch of rectangular glass slabs, improvements in the camera area have become a key area for improvement.

While some go for crazy megapixel counts, like the Nokia Lumia 1020, or for crazy optical zoom experiments like the Samsung Galaxy K Zoom, the current trend is for excellent low-light photography.

Given the size of image sensors in smartphones, and the general use-case scenarios they are given, designers have stopped trying to out 'camera' DSLRs and have begun to deliver the most from small sensors. Some such as the Samsung Galaxy S6 and iPhone 6 succeed, where others fail.

This battle has now moved to the budget market. Whereas even last year, £150 might have bought a phone without an LED flash, or sometimes even autofocus, acceptable optics have become a focus for many.

Acer's efforts in this regard are… interesting. With a 13MP sensor, a nice wide f1.8 aperture and Acer's own Bright Magic mode, on paper this camera is very well equipped for the price point.

With the race tightening, however, the competition is only becoming tougher.