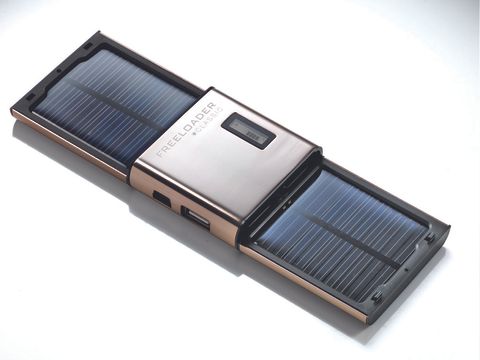 Charge your gadgets without using a power socket

For those people heading to a festival this summer, a portable charger is a must-have gadget.

Solar chargers are ideal because they allow you to harvest energy from the sun and then deliver it straight into your mobile device of choice without even laying eyes on a power socket.

The Freeloader Classic has an internal battery which can be charged using either the detachable solar charging wings, or by plugging it in to a computer's USB port.

On a hot summer's day with no cloud cover, the internal battery will take around 8 hours to charge and that energy can be fed into your mobile phone or iPad using the included adapters. The device has its own full-size USB port so you can charge an iPhone using its own USB charger, while most other devices will usually need one of the included adapters.

The charge can be passed into your phone in around 2 hours. So it's not exactly the quick burst of juice you get from hooking up to a wall socket, but you can easily leave it charging during the day and then plug your phone in at night, and we found that to be the best way to work it.

The battery will supply around 2 hours charge to an iPad, but will give a smartphone something closer to a full whack which is crucial for those spending extended periods in the outdoors.

There's also a nifty little LCD panel on the front which indicates how much charge is left in the battery, so you'll know when the lemon be done juicin'.

We found the charging capabilities of the Freeloader Classic quite impressive. But ultimately, the product is let down by the fact that our great yellow sun simply doesn't have much regard for the UK and never will.

Cloudy days spoil the solar party completely, and even bright sunshine during the cooler months isn't enough to charge the Classic in anything even resembling a workable timeframe.

But if you anticipate getting a lot of sun in the middle of the British summer, you could do a lot worse than picking up one of these.