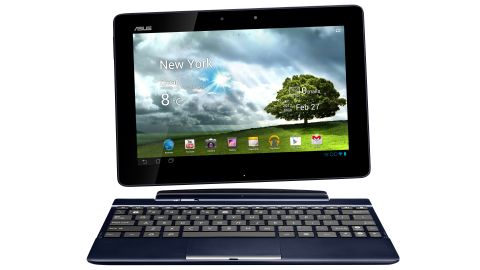 Packs in plenty of power and top technology, but the lack of refinement in the screen and build quality stops the TF300 being crowned the king.

The Asus Transformer Pad 300 has been hotly anticipated since its announcement at MWC 2012, and for good reason. This is the lowest priced quad-core tablet we've seen, which goes big on value, something that's welcomed by double-dip recession hit wallets everywhere.

You won't see a tablet review without 'Apple rival' or 'iPad killer' chucked in willy nilly, but let's get something clear: this is a contender for the tablet top table, and should make the tech world sit up and take notice.

The TF300, as it's known, is a 10.1-inch Ice Cream Sandwich tablet that 'transforms' into a netbook style device, when the slate slots into its keyboard dock. You can then work on office documents using the keyboard, and control Android with the mouse pad, much like any laptop.

It's a new addition to the Transformer range, which currently includes the Asus Eee Pad Transformer Prime, and will be joined by the full HD toting Asus Transformer Pad Infinity 700 later this year.

The Transformer Pad 300 packs Nvidia Tegra 3 quad-core power, a stated 12 hour battery life and excellent usability to the £399 category, which is currently occupied by the new iPad and the Samsung Galaxy Tab 10.1.

While the Asus Transformer Prime sells for £500, Asus has managed to pack the same technology into the Transformer Pad, and offer better value than its competitors for £100 less.

There's also a range of colours on offer, including a fetching red, blue and silver.

If the thought of quad-core power, long battery life, and writing emails without frustrating mistakes appeals, read on for our full definitive review.

Next Page Design and features