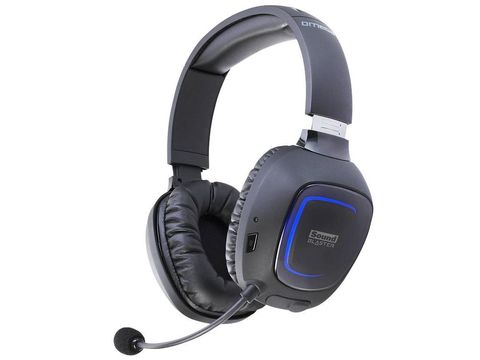 The Creative Sound Blaster Tactic 3D Omega is one of the best gaming headsets we've ever tested.

People talk about sound quality a lot. Many products claim to deliver crystal clear audio and most press releases for these products declare an unrivalled attention to detail and sound quality unlike anything the world has ever seen.

Exclamation marks are often deployed at the end of these sentences!!!

Most of the time, of course, it's all a complete load of dingo's gonads. But the Sound Blaster Tactic 3D Omega is the real deal.

The Omega headset comes in a number of different pieces. In the box there's the headset itself, the USB soundcard dongle, various USB cables, a stand which you must assemble yourself, and some audio cables for connecting the dongle to a games console.

The headset itself is wireless, so you'll need to charge it for a good five or six hours (more like eight if you charge from a USB port) using a microUSB cable before you can use it. There's a USB port on the dongle itself which will relay a charge into the headset via your computer's USB port, but it's much quicker to use a proper microUSB charger – lots of mobile phones come with those these days.

The earcups contain 50mm drivers which offer a powerful punch and an all-round meaty sound. There's none of the treble-heavy audio that you get with many other gaming headsets. The headset is big and weighty, too, with a good headband for comfort and big, bouncy earpads for a snug fit as well as excellent noise isolation.

On the headphones you've got an on/off button which you press and hold, there's volume up/down controls as well as a microSD charging port and the port for connecting your Xbox 360 controller.

With the PC and Mac, it acts as the system's soundcard and conducts all of the sound processing itself. However, when in console mode (there's a slide-switch on the front), the USB dongle acts as more of a conduit between the PS3 and Xbox 360's own sound systems, and the fantastic headset itself.

So while it acts as a two-way communications throughput for the consoles, you can also use the line-in port on the back with any other sound device. If you want to listen to your iPod using the headset, one way would be to just plug it into the 3.5mm port.

In theory you could use this method to hook a Nintendo Wii up to the headset too - you'd just need to attach your TV's audio-out port into the dongle's audio-in port - it would only work for sound though, the microphone wouldn't work.

Connecting the Omega headset port to a console is a case of connecting the Xbox 360 or PS3's red and white composite cables to the 3.5mm adaptor provided in the box, and plugging the dongle in via the supplied microUSB cable. You then have to change your consoles' audio settings so that they know to send the sound out through composite instead of HDMI – instructions are included.

There's also an additional inline volume control for Xbox 360 gamers - you plug one end into the headset and the other into your 360 controller just like you'd normally do with the 360's bundled headset.

In general it's not the easiest setup for anyone without a tiny bit of confidence with tech, but for anyone used to fiddling around with USB cables, audio devices and changing the settings on the consoles themselves, it's a fairly straight-forward process.

The dongle and headset setup is a collaboration between Creative and THX, the former supplying a lot of sound-processing know-how.

Gone is the old X-Fi branding, and in comes the THX TruStudio Pro software suite which offers the same Crystalizer, Surround and Smart Volume features as we've seen many times before, but also improved bass boost and a fantastic Dialog Plus mode to enhance dialogue in movies and other media.

Many gaming headsets – including a lot of the good ones – work well for gaming, but aren't great for listening to music or watching movies. But the same cannot be said for this headset – sound quality is decent across the board.

Music playback has a delicate balance of meaty bass and delicate, precise treble while movies sound equally good. The software settings enable you to customise your setup for personal preference, too.

The Dialog Plus setting, in particular, works very well and does a good job of bringing dialogue to the forefront without compromising the rest of the sound spectrum.

There's also a customisable TacticProfile which enables you to save your own settings or use pre-configured settings from pro-gamers, as well as the now-standard programmable VoiceFX system for voice morphing into in-game characters or during VoIP chats. Yay for talking like an alien.

These settings are, of course, not available when using the headset with a games console. And due to the various cables that need switching and settings that need changing, this is not a device you'll be wanting to move around your home.

You won't want to be using it as your primary PC headset and your console headset – it's just too awkward and fiddly to be moved around like that.