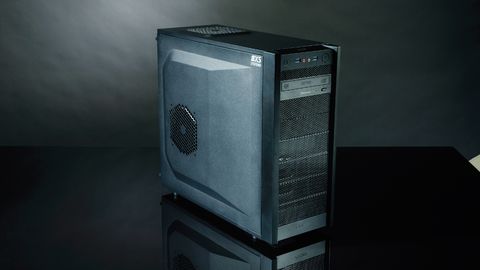 When you're putting together a machine for a thousand of your Earth pounds, there are many options to consider and many different configurations. We don't have any identikit builds in this test, though there are threads that run throughout, like the use of Intel CPUs.

Balance is important, but the chances are you're going to have to make a compromise or a sacrifice somewhere.

Like the Cyberpower Infinity Apollo, you can plainly see where the sacrifices have been made in this rig before even looking at the benchmarks. We are, of course, talking about the decision to opt for a GTX 660 Ti in the graphics card slot.

Where it differs from the Cyberpower is that we've got a lot more in return for giving up some straight-line graphics performance. That 240GB SSD is a real bonus, and something we'd be pleased to find in any rig. With 240GB of space on your OS boot drive, you can fit in a healthy Steam collection, and it will all boot and respond just as you'd expect from a solid state starting point.

That ubiquitous Intel CPU is once again given the 4.6GHz treatment, and comes with an absolutely mammoth air-cooler strapped to it to keep it running happily with its chunky clockspeed. The Gigabyte Z77X-D3H is one of the two mobos of choice in this test - the other being Asus' similarly budget-oriented P8Z77-V LX - and both are excellent value choices for an all-round PC build.

The difficulty is that we're going to keep coming back to that GPU choice. Performance is (almost) everything, and when a rig is giving gaming benchmark numbers this far off the pace, it becomes tough to recommend.

This 3XS machine leaves you with a stark decision to make: is the chunky SSD worth the relative lack of gaming prowess? For us PC gamers, the answer has to be no.

The SSD may make your games and PC boot quickly, but by the time you're in-game, mowing down zomboids from a Huey or engaging in massive skirmishes planetside, it's all about frame rates. You don't want to be thinking about upgrades straight away when you've just spent £1K on a gaming PC, but dropping in an SSD later is going to be a cheaper upgrade path than throwing away your GTX 660 Ti and buying a new, faster graphics card.

From a starting point then we'd much rather have a speedier GPU and a HDD, or a low-capacity SSD that we can upgrade at a later date.

Specs are only part of the build though. Almost as important is the service you get. Sure, if everything works perfectly for three years you'll have no need of SI back up, but that's a situation that rarely happens.

Scan has easily the best standard warranty of all the SIs in the test. If it was just a three-year parts and labour warranty it would be great, but when the first year is on-site, it takes it to another level.

While we wouldn't necessarily recommend this spec for a £1K build because of the focus on SSD rather than GPU, we would have no hesitation recommending Scan build you a rig of your choosing.