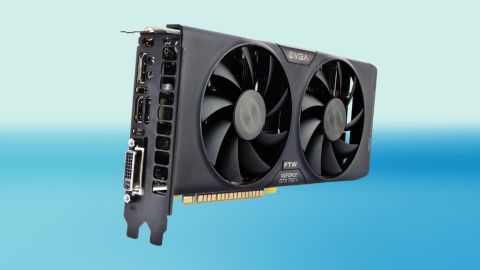 A decent performer, but just good enough to make it a stellar buy. There is simply too much competition from other similar Nvidia cards.

This FTW version from EVGA brings some serious overclocking to this mainstream GPU, as well as its own Active Cooling eXtreme (ACX) cooling array.

The base clock of this EVGA card has been boosted some 169MHz above the 1,020MHz of the reference version. That frequency gap gets even bigger when you're talking about the boost clock of the reference card, which stands at 1,085MHz compared to the FTW's 1,268MHz. Plus, we saw the EVGA card sitting consistently at 1,333MHz. Compared with the reference card's rating of just over 1GHz, that seems like a big overclock for such a mainstream GPU.

That 16% frequency boost gives, at best, a 16% hike in average frame rates. Mostly, you won't get that. Still, this translates into the price EVGA is asking for this card – it's only around 15% more costly than the reference-clocked versions.

We all know the the trials of buying pre-overclocked cards before. If you're on a budget, buy a reference-clocked graphics card because you'll usually get similar frequency boosts with some light overclocking of your own.

Where they become more worthwhile – especially the pre-overclocked cards we've seen from EVGA recently – is in the third-party cooling arrays that are strapped to the factory-boosted GPUs. EVGA's ACX cooling array has been impressive when strapped to Nvidia's top graphics cards, such as the GTX 780 Ti, and drops the peak operating temperature by some 13°C. Meanwhile, the dynamic GPU Boost 2.0 adjusts GPU frequencies based on temperature.

That's all win, no foul for a high-end graphics card, but when you're looking at these more price-oriented cards, factory overclocks have less value. The performance boost is small, especially compared to what you can achieve yourself, and with these chilled Maxwell-based cards, the third-party cooling becomes pretty irrelevant.

The reference GTX 750 Ti, with its '90s-style cooling block, only gets up to around 54°C. Granted, the ACX cooler on the FTW card drops that to 45°C, but when the peak operating temperatures are
so low that almost ceases to matter. However, the extra cooling and hefty overclock means that this FTW version requires a six-pin PCIe power connector. Sadly, that makes this card a less versatile upgrade than something like the KFA2 GTX 750 that can be dropped into most PCs.

Not all overclocked, third-party-cooled cards have a price premium (the EVGA GTX 750 Ti FTW is £131). Gigabyte's card is overclocked, with a cooler hitting the same temps as the ACX array, and is the same price as a reference card. Its frame rates are a bit slower, but this could be made up with a little overclocking of your own…

The extra 169MHz overclock EVGA has placed on the FTW edition gives it the edge in gaming performance. Sadly, that edge is a little slim to say the least. The (rather loud) ACX cooler really does its job though, even at those high frequencies, cooling the GPU well beyond what the reference card can manage.