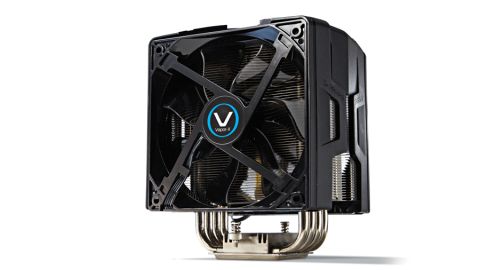 Yep, you've read the name right, Sapphire has plunged into the murky world of third party processor chilling with its Vapor-X CPU cooler. It's been making some of the best-cooled graphics cards for years, so it seems logical to point its engineers at a CPU and tell them to cool that. It's all heat displacement, right?

The Vapor-X is a pretty stunning first effort. It's not perfect, but it does have some nice design features such as the way the fans are mounted. Yes fans, plural.

The Vapor-X comes fitted with a pair of 120mm fans. And if you like your CPU coolers to come with a bit of bling, you're in luck - not only are the fans lit by blue LEDs, but so is the Vapor-X branding on top of the cooler and the detailing pin stripes.

The name tells you all you need to know about how the cooler works - Sapphire's vapour chamber technology is at the heart of the most efficiently chilled graphics cards out there.

The Vapor-X uses a vapour chamber contact plate directly on top of the CPU, with the heat being passed through four 7mm copper heat pipes. These pass through a second block sitting on top of the chamber, before passing through the large aluminium cooling matrix. That's the part cooled by the pair of 120mm fans placed on the front and back of the matrix in a push/ pull arrangement.

Also built into the top of block are the screw mounts for fixing the cooler to the mounting adaptor on the motherboard. The PWM 120mm fans themselves are branded Vapor-X, and spin between 495 and 2,200rpm. At maximum revs they produce 77CFM of airflow each. They're very quiet at lower revs, and even at peak levels (at stock CPU speed at least) they remain relatively demure thanks to their sleeve bearings.

A quick word on the large shrouded fan mounts that hold the fans in place: they're excellent. The fan mounts clip in place so easily, you wonder why anybody bothers with wire mounts. It's a good job they're so easy to remove, as they need to come off so you can screw the cooler in place.

The Vapor-X performed well in our tests too, keeping the i7-3770K nice and cool at idle. At peak CPU usage it's one of the best coolers we've seen lately, and keeps very quiet too.

The same can't be said when the overclocked CPU is loaded to 100 per cent though, as the fans roared into life - funnily enough, very much like a graphics card cooler! They quickly settled at a lower, but still audible, noise as they went about keeping our overclocked CPU at a steady 88°C.

For a first go at a CPU cooler, the Vapor-X is impressive, but with Sapphire's expertise in keeping GPUs cool that shouldn't come as a great surprise. It kept our i7-3770K cool at stock and peak speeds, and it was very quiet when doing so. Overclocked it was a different story as the fans became very noticeable, so perhaps a little more profiling of the fans may be in order.

It's a well made unit with the usual Sapphire build quality, and whoever came up with the fan mounts really deserves a pat on the back.