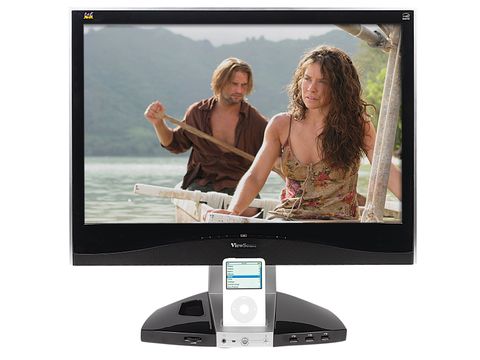 Despite its bold claims, the Viewsonic is at its best when used as a plain old computer monitor

If it's an excellent PC monitor you're after, here it is - but forget about the iPod dock

We've seen iPod alarm clocks, armbands and hi-fis with docks, but this is the first LCD product that boasts integration with the Apple player's video capabilities.

Promises, promises. Its very name, the ViewDock, sounds as if it can play video footage stored on the iPod Video. With a 22in widescreen monitor and a built-in docking station, four USB ports and an 8-in-1 card reader, it sounds versatile. And stereo speakers, a microphone and even a subwoofer. It's starting to sound like the ultimate desktop accessory for internet video users at a great price. (The VX1945wm 19in version costs just £240.)

But this 'world first' is nothing more than two separate products - a regular PC monitor and an iPod dock - stitched together.

Below the 22in screen, is a docking station for an iPod and you'd think this means a lot less cabling. But you're wrong. Users will, unbelievably, have to put up with two power cables - one each for the monitor and the dock - and a USB to connect your PC (and allow the transfer of files to and from the iPod dock). Add a DVI or VGA cable for linking a PC and a couple of audio cables - to feed the PC's speakers from the iPod dock just inches away - and the whole affair appears rather pointless.

At least you can watch video footage stored on your iPod on the screen, right? Well, no, that's not possible either. To integrate, your PC must have iTunes. Fine, but that's where most iPods are updated from anyway. Anything you want to watch or hear is best controlled via iTunes alone: turn off the iPod dock and forget it.

The audio side is also hugely disappointing. Equipped with two stereo speakers that span the width of the monitor, as well as a subwoofer, the unit held great promise for musical integration with the iPod. But switching between listening to sound from an iPod and a PC involves a tangled web of cables to change, and worst of all, a weak and weedy sound emanates from the speakers and the subwoofer is barely noticeable. There is at least a stereo output for connecting more effective speakers.

Smooth and watchable online video enhanced by ClearMotivTM technology proves that the VX2245WM could have been a contender had proper integration with iPod Video been achieved.

But the mess of cables and weedy sound make this one to ignore.