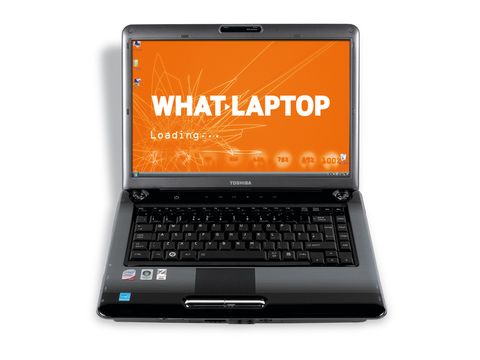 The A300 combines the rounded styling of other recent Toshiba Satellite laptops with glossy, patterned plastics

A good quality and user-friendly laptop, all at a very attractive price

Toshiba's Satellite A300-177 (£499 inc. VAT) is an affordable laptop aimed at the home user, and beneath the glossy styling you'll find a host of media-centric features, such as touch-sensitive hotkeys that let you control your CDs and DVDs.

The system also takes advantage of a feature in Windows Vista called HotStart that lets you play music or video files without delay. Watching movies on this machine proved a pleasurable experience, thanks to the large, bright and colourful 15.4-inch display.

It's a Super-TFT panel, so there are reflections in brighter conditions, but it's ideal for use around the house.

It's a good machine for those wanting to perform basic tasks, but the use of an integrated graphics card limits 3D performance. As such, you won't be able to play the latest games or carry out intensive video editing, but battery life benefits as a result.

We managed to get around three hours between charges, and the semi-portable 2.9kg weight allows you to take the Toshiba on the road with you.

It's one of the most distinctive laptops we've seen to date, combining the rounded styling of other recent Toshiba Satellite models with glossy, patterned plastics.

The keyboard is one of the best we've seen in terms of usability - with large, tapered keys that offer a perfect amount of travel and move with a reassuring click. It may not be quiet to use, but the keyboard is very easy to type quickly on.

The keys are finished in the same shiny plastic as the rest of the chassis, which is a strange choice considering the fingerprints they pick up. The touchpad has a courser finish, making it easy to position the cursor accurately.

Cheaper than most rivals

Despite this, it's easily fast enough for most uses, and the system only slowed down when running several intensive programs simultaneously. A 200GB hard drive provides plenty of storage space for your films and applications.

The Satellite betrays its roots as a consumer machine when it comes to wireless networking, where an older 802.11a/g Wi-Fi adapter is used. And external display can only be connected by analogue sources, using either S-Video or VGA-out ports, with no support for DVI or high-definition HDMI.

Although the Toshiba Satellite A300 lacks the speed or cutting-edge components of its rivals, the excellent build quality and the comfort its user interface offers makes it a compelling choice. That it comes in at £200 less than most of its rivals is a boon.