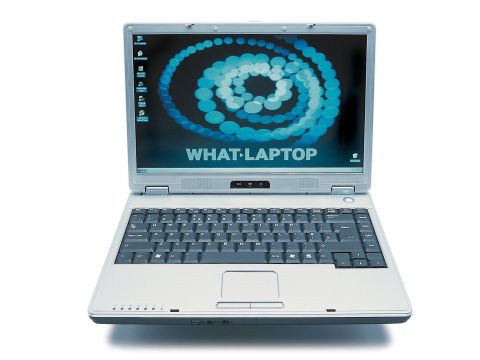 The silver casing of the Rockdirect Pegasus T4 (£899 inc. VAT) is striking and certainly belies the affordable price of the system. With a battery sticking out from the rear of the case - the only thing marring the look of the laptop - this system will appeal to either business or home users.

Powered by an Intel Pentium M 735, which runs at 1.7GHz, the system has sufficient power to deal with most tasks. Supported by 512MB DDR SDRAM and fitted with a 40GB hard drive, there is also sufficient storage from the machine.

However, where the core specification is let down is by the use of an Intel 855 chipset rather than the latest 915, which offers an improved FSB as well as an enhanced feature set. This older chipset is highlighted by the the lower than expected MobileMark 2002 score from this system, with the Pegasus scoring a benchmark of 111.

With an overall weight of 2.5kg, the Pegasus is a portable and highly-adaptable laptop. This is especially impressive given that the system has a 14.1-inch panel offering widescreen support. This unit could well prove to be usable as either a desktop alternative or as an everyday mobile unit. The use of integrated graphics detract from its desktop PC role, as it offers less than ideal support for labour-intensive tasks.

With the large battery pack on the back of the unit, we were expecting a reasonable battery life from the system. Even so, we were more than impressed with a score, under test, of 308 minutes.

The build quality of the system is impressive with a solid feel and an extra layer of protection behind the panel. The hinges are solid and hold the screen firmly in place. The keyboard is of a good size and takes advantage of the widescreen panel by filling the width of the main chassis, making for well-spaced keys.

With a reasonable amount of travel to the keys, we were disappointed by the slow response of the keyboard, making for an awkward typing action. The mouse buttons are flush with the case, but are of a good size, making them easy to use. The same also holds true for the small but accurate touchpad.

There are a couple of nice touches added to the case, such as a DVi (Digital Video in) port located on the left-hand side of the chassis. While such ports are common on Apple laptops, they remain relatively uncommon on Windows-based systems.

You can use it to send a digital signal either to a suitably enabled data projector or to your home DVD player and TV, if they are supported. The Rockdirect Pegasus T4 is a good allround performer that manages to offer a reasonable specification for a realistic price. As with so many machines in this price range, the keyboard and use of integrated graphics hinder its performance, but if you can live with such minor complaints this will prove a satisfactory system. Alex Bentley & Michael Browne