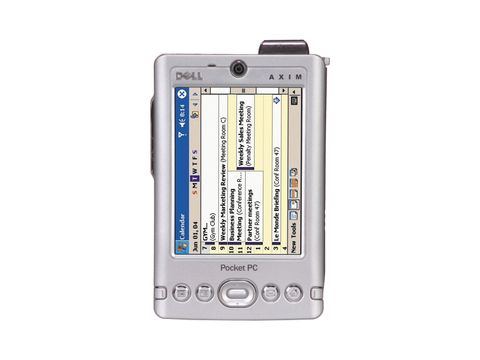 The Dell Axim X30 (£278 inc. VAT) takes the styling of the slightly older X3 but brings with it a faster feature set for a similarly aggressive pricing. That said, the styling of the Axim X30 doesn't break any new ground. It conforms to the standard format of four function buttons and an omni-directional navigation key. An antenna protrudes from the top of the unit, which is used in conjunction with the 802.11b Wi-Fi adapter built into the X30.

The X30 was the first PDA made available to run the Intel PXA270 processor. While this is now commonplace across the spectrum, the 624MHz chip is still the fastest available. With support on the chip for enhanced graphics, users will find they can run video and games much smoother than was previously possible.

With 64MB of memory, 30MB of which is available to the end user, the X30 doesn't offer the greatest amount of built-in memory. However, with expansion in the form of a SD (IO) slot located on the top of the unit, users can get extra memory easily and cheaply. With 64MB of ROM memory, users will be able to upgrade the operating system as and when updates are made readily available.

The 3.5-inch screen has a QVGA resolution (320 x 240 pixels) and provides good all round image quality. Along with the Acer, a feature that the X30 doesn't have support for is that of revolving the screen.

When it comes to the supplied software, Dell does not offer anything other than the standard Pocket applications that come as part of the operating system. This reflects the company's no-frills approach to PDAs, which keeps their cost down to a minimum.

Bluetooth and Wi-Fi come as standard in the model, but users can save money further by opting for a model without - the X30 standard (£148 inc. VAT) has 32MB of memory and uses a 312MHz processor.

When it comes to the usability of the Axim X30, we found it was responsive enough for everyday tasks. The addition of the processor may not make much of a difference for basic tasks, but it does help speed up multimedia functions. Michael Browne