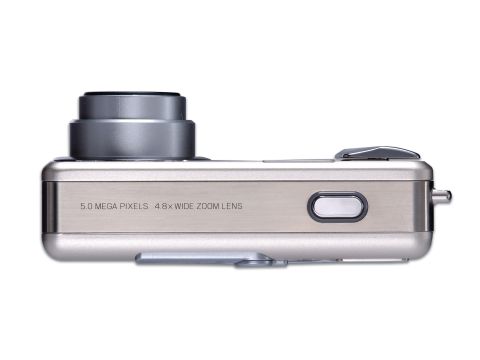 Ricoh has decided to build on the positive reviews of its Caplio R1 camera with this quick-fire update. The R1v is almost identical to its predecessor; the main difference is the step up from a 4-megapixel CCD to a more headline-grabbing 5MP version, with a £30 price hike.

In a market that moves as quickly as the compact digital camera one, it's important to be up there on the feature count; it's obviously not a good idea to be one of the minor photographic lights and have less than 5MP at the £200 mark.

Externally, nothing has changed. Ricoh's still squeezed a wide-angled 4.8x zoom lens into the camera's 25mm-body. This covers the equivalent of a 28-135mm lens on a film camera, and is impressive in such a compact model.

The wide zoom, coupled with the new, higher resolution on offer, should make this update even more competitive than its previous incarnation, although some of the R1's problems still exist. Most notable among these is the creaking and groaning noise the lens makes when folding back into the camera shell.

Among the positive features is the fast start-up time. Less than a second after you turn it on, you're ready to shoot - perfect for this type of camera; the target market is bound to be those who want to snap their friends doing something they'd think twice about, given time.

Assisting on the speed front is a two-step focusing system. If you want to snap a shot tout de suite, just press the shutter release and you've got a picture. The results are generally good, although some close-ups of faces were less than perfect, particularly when the flash was used.

If you have time, you can use the more advanced hybrid AF system, which kicks into action if you hold the shutter release down for a second before finishing off the press and capturing the image.

A couple of other features are worth mentioning. The nightscape mode proved fun in a subterranean jazz club, capturing the low-light atmosphere impressively. We'd recommend a tripod for this, although resting the camera on the bar gave some positive results.

This camera is also rather special in that its ISO range goes up to 800, and while noise at this level can become a problem, when shooting in dingy surroundings it brought about a welcome reduction in camera shake.

But not everything went smoothly. The R1v suffered during a long weekend in Prague, with its sub-zero temperatures. Our concerns over the noise the lens made opening and closing came to a head, with the mechanism sticking at some points.

We expected the battery life to drop in such conditions, but we weren't prepared for the mechanical failings: the quick-start, that Ricoh is justly proud of, dragged on and on; and after taking a shot, it was an age before the image was displayed on the LCD screen.

More worrying was that this problem occurred occasionally, no matter where we were. Most of the time the R1v kicked into action as if it had awoken with a double espresso, but sometimes it had been on the decaf, with the screen taking an age to set itself up.

A few other quirks made us suspicious about build quality and reliability - such as the occasional long lag between taking a shot and it being written to the SD card - which was a shame as the R1v lived up to our expectations most of the time.

However, in one area it exceeded them: image quality. In all major areas, such as colour, definition and exposure accuracy, the R1v proved itself to be more than capable. Even in less than favourable lighting conditions, the camera reproduced accurate contrast and colour saturation.

The wideangle lens also proved to be a godsend, whether shooting snowy panoramic shots in Prague or squeezing in all your mates for group photos. There are some problems with it, though, and these are mainly concerned with the little bit of image quality you seem to lose in the trade-off with the wideangle lens.

As with the R1, there's a definite darkening of the image around the edges which, while not a major problem, is a little bit disappointing at times.

At the end of a long, sometimes frustrating day, the Ricoh Caplio R1v can be a right pain in the backside. However, if you're not easily flustered, and are willing to make some concessions for a rather annoying operating system, then the impressive image quality produced from this highly specified, lowly priced camera is well worth the price of admission.

Just be prepared for those occasional bad days. Shaun Marin