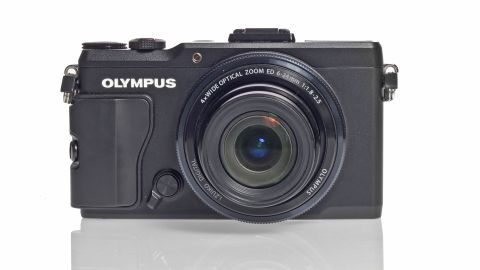 When Olympus launched the XZ-1 in early 2011, its high-end features made it instantly popular with consumers and critics alike.

Priced at £479.99/AU$649/US$599.99, the new Olympus XZ-2 looks to pick up where its predecessor left off and deliver a great deal more to the serious enthusiast market.

The Olympus Stylus XZ-2 also boasts raw image capture (as well as fine and normal JPEG), capabilities for sharing photos straight from the camera to social networks. And, of course, it's compatible with a range of Olympus accessories.

The Olympus XZ-2 also indulges creative composers with 11 natty art filters to spruce up shots, including all the stalwart must-have effects such as Pop Art, Diorama, Grainy film, Soft Focus and Key Line, yet the absence of the watercolour filter hasn't gone unnoticed.

Although the new feature-clad compact matches its predecessor's pixel count (12 MP), we see it has ditched the CCD sensor and upgraded to a large back-illuminated 1/1.7-inch CMOS sensor for cleaner results.

Olympus has also seen fit to install the same TruPic VI processor as seen in the Olympus OM-D, Olympus PEN Lite E-PL5 and Olympus PEN Mini E-PM2, helping to raise picture quality across all of its merchandise.

One area Olympus has wisely left alone is the XZ-1's i.Zuiko Digital 28-112mm (equivalent) 1: 1.8-25 lens. At the time of its launch, this greatly impressed audiences with its extra-wide aperture, and continues to do so today.

Matching its heavyweight feature set, the black plastic and metal fashioned Olympus XZ-2 exudes a bulkier and bigger presence than most contemporary compacts, yet is slimmer and more streamlined than the common CSC, sitting somewhere in the middle with a shooting ethos to match.

Using the device is relatively comfortable, thanks to a rear thumb pad and front finger grip, the latter of which can be removed. The extra weight and girth suggest durability is assured, and we found its hinges and compartments as sturdy as the rest of it.

One of Olympus' biggest selling points of the XZ-2's design is the touch-sensitive 3-inch 920,000 dot tilting LCD, offering photographers the ability to focus and shoot instantly, and zoom into captures and move around images in playback.

Although there may be occasions when setting the AF point on screen is useful, we found it relatively hit-and-miss, and especially found highlighting areas at the edge of the screen almost impossible.

The enhanced feature-set of the LCD goes some way to make up for the lack of a viewfinder, but the device does have an accessory port which can accommodate the optional external viewfinder (or flashgun for example).

We were delighted with the brightness of the screen, which depicts scenes clearly in most lighting scenarios, and thanks to its pull out and tilt design we were able to shoot at a pleasingly wide range of viewing angles, including accurately composing shots over head, up high and at floor level.

It's just a small shame the screen can't be tilted vertically as well as horizontally, and although Olympus pledges that the anti-fingerprint coating should ward of paw prints, during our week-long assessment of the camera we can honestly say it didn't.

Manual shooters will be pleased to note that the Olympus XZ-2 improves on its predecessors' offerings with the inclusion of the front control ring, which, in analogue mode, can be used for zooming in or for fine tuning focus manually.

Or in digital mode it can adjust aperture, shutter speed, flash exposure and exposure compensation.

The manual functionality here is a big plus, and as soon as the camera is turned on the lens zooms in close on the subject, leaving the shooter to ensure focus is pin-sharp.

Elsewhere, the addition of two customisable function buttons (one on the back and one on the front) come in handy for programming commonly sought-after controls such as ISO or White Balance.

The device's menu systems and commands can seem a little backward to operate at first but, after a little time spent familiarising with it, things become a little easier.

Although there are some processes which seem questionable, such as the lack of a dedicated on-body macro mode; instead users must trawl through the menu system to find it.