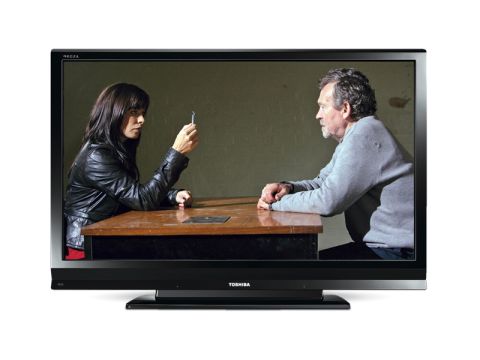 The Toshiba 32AV635 looks a little bit budget, but there's some major technology inside

Although inevitably flawed, the 32AV635 is still remarkably good value for money in these cash-strapped times

Getting any LCD TV of this 32-inch size for £425 seems a fair deal to us. But when that TV has a brain like the 32AV635's, our bargain-hunting antennae go into overdrive.

MetaBrain is a combination of Toshiba's Active Vision multipurpose video processing for boosting picture elements, plus the Resolution+ upscaling technology.

The latter draws on techniques developed for Toshiba's cell processors to add more detail to standard-def sources, while also reducing video noise – and we're very happy indeed to find it on such an affordable LCD TV.

At first, though, the pictures don't look as if they do justice to those impressive specifications. We immediately noticed how low on brightness pictures are relative to some rival screens. This means, too, that dark scenes are short of shadow detail and so appear slightly hollow.

Other problems include the occasional rogue colour tone and a loss of contrast and colour if you watch from an angle.

But the longer we spend with the 32-inch 32AV635, the more we see beyond these initial foibles to the strengths behind them – the most striking of which is its standard-definition performance, because the Resolution+ engine makes a great job of upscaling Freeview broadcasts to the screen's HD Ready resolution, without exaggerating noise. No other budget television can match the 32AV635 in this respect.

Colours look richly saturated, too, and are actually pretty natural for most of the time; it's only during very dark scenes where those rogue tones crop up.

Motion handling is respectable for a cheap TV without 100Hz, too, with only minimal blur and judder.

HD images don't look as crisp as they might, but they still look hi-def, and that's probably as much as you could reasonably expect for £425.

Predictably, for its price tag, the 32AV635 doesn't add any particularly spectacular audio to its generally likeable pictures. Bass is in short supply and trebles can sound harsh. But again we return to the fact that even merely passable audio is more than acceptable for the 32AV635's money.