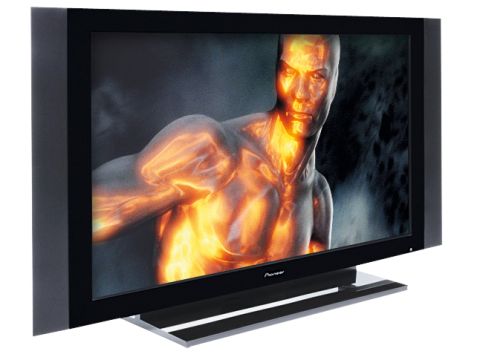 Proprietary Pioneer technologies produce levels of black that are deeper, more cinematic and more natural than any seen before on a flatscreen TV

It doesn't come cheap, but the LX608D is so good in so many ways that we have no choice but to give it a whole-hearted five stars

Necessity is the mother of invention, they say. And so as the extraordinary price erosion in the flat TV marketplace has made it difficult for even household brand names to compete, industry 'minnow' Pioneer has opted to focus its considerable PDP expertise on producing something so truly cutting-edge that it can maintain a premium price, even as lesser screens head to the bargain bins.

The result is Kuro, a plasma TV design so radical that in some ways it's scarcely plasma as we know it. The first wave of Kuro's have won acclaim worldwide, so what should we expect from this 60in model? As the first Full HD Kuro panel, the PDP-LX608D arrives in a flight-case heavy with expectation.

The crux of the matter

Lest you missed our evaluation of Pioneer's debut Kuro TV, the 508XD, the key thing you need to know is 'black'. Kuro is Japanese for black, the bezels of Kuro TVs are entirely black, and most important of all, proprietary Pioneer technologies produce levels of black that are deeper, more cinematic and more natural than any seen before on a flatscreen TV.

Pioneer has achieved these revolutionary black levels by cultivating four main areas of innovation: 1) there's an improved 'crystal emissive layer' that boosts the efficiency of the discharge cycle in each plasma chamber; 2) created unusually deep-set plasma chambers that reduce the potential for colour and light cross-contamination; 3) beefed up video processing to treat bright and dark scenes differently; and 4) refined the Deep Colour Filter to soaks up ambient light. Simple huh?

As befits what's unquestionably a premium TV, the LX608D is stuffed with top-flight video tech.

While other brand's have only just begun to offer support for 1080/24 HD video, Pioneer has long had a 72Hz mode. This is similarly optimised for the playback of 1080p/24Hz sources.

Other attractions include a 'dot by dot' mode that removes overscanning for perfect transposition of Blu-ray and HD DVD material to the TV's 1920 x 1080 panel, no less than four dedicated noise reduction routines (including one for reducing MPEG noise); and a USB input. The three HDMIs, meanwhile, are all v1.3 and CEC-enabled, meaning the TV's remote can operate any CEC-capable sources connected to them.

The HDMI's are also compatible with advanced functionality like Deep Colour. Pioneer product manager Jim Catcheside has been quick to criticise current LCD TVs and their claimed support for DeepColor (also known as 'xvYCC', a system that supports colour depths up to 16bit over HDMI 1.3): "They may have the multi-bit video processing, but can the panels they're using display the result?".

Naturally, Catcheside heaps the praises on the LX608D: "It may only take sources up to 12bit, but thanks to the extended colour gamut of Pioneer's Kuro 8th-generation panels the resulting pictures will look far more realistic than any current DeepColor".

As you might expect, the extra inches and Full HD resolution make the impact of Pioneer's Kuro screen even greater than before.

In terms of black level, there's just as much richness and sheer depth as with the smaller screen. It's actually difficult to see the join between the screen and the jet-black bezel when you've got something completely black on show, such as the menus to the Pirates of the Caribbean: The Curse of the Black Pearl on Blu-ray.

As you'd expect, these truly unprecedented black levels make dark film scenes, like the Black Pearl's attack on the Fort look stunningly cinematic, with terrific dynamism and a sense of scale. Backdrops refuse to be flattened by greyness.

The Full HD nature of the Pioneer's pictures adds a fraction more subtlety to colour blends than I saw with the common-or-garden HD Ready Kuro set (though the difference is only marginal), and HD pictures look even crisper and more detailed. It will be interesting to see if we notice such Full HD advantages on Pioneer's smaller 1080p sets when they appear, but at 60in the improvements, though subtle, are certainly evident.

Another key strength of Pioneer's Kuro panels has been the exceptionally rich colour presentation. This trend also continues with the LX608D, as the extreme black level response helps the TV produce a uniquely wide colour spectrum.

The best results were achieved after a brief journey into the Pioneer's picture adjustment menus. I'd recommend that you ignore the preset picture modes Pioneer has programmed into the TV; choose the 'user' option and finetune things for yourself.

The results will be worth it. It's relatively easy to achieve a 6500K colour standard, and, handily, your settings are then remembered for each separate input.

When watching HD sources on this screen, the best thing to do is let them speak for themselves. So turn off all noise reduction systems, make sure you've selected the 'Dot by dot' aspect ratio, and only use the Advance mode for 1080p/24 sources.

One consequence of the two-million pixel panel is that it's visibly dimmer than the first-gen panels. This isn't much of an issue when the screen is deployed in a home theatre environment, but they could be found wanting in a more brightly lit environment.

The sheer scale of the image means that it is particularly demanding with source material. Naturally, HD looks great, from both Sky HD and hi-def disc players.

Tune into Prison Break on Sky One HD, dim the lights, and you'll feel like you're incarcerated alongside Michael Scofield. Standard-definition - perhaps inevitably - can look a little plasticky and soft. But all things considered decent SD can look surprisingly acceptable.

Audio performance improves over many flatpanel TVs, because the (detachable) speakers are on either side of the screen. The result is good stereo separation. As far as tonal balance is concerned, mid-range and treble are up to Pioneer's usual high standards.

The LX608D is a remarkable TV in so many ways. I could enthuse about the cinematic impact it delivers, and how it sets new flatscreen black levels.

I could even say that its performance is so good, it puts to rest any ghosts of Toshiba's now-dead SED technology that was supposed to be the successor to both PDP and LCD. But perhaps it's sufficient just to say that this is probably one of the most accomplished TVs in the world.