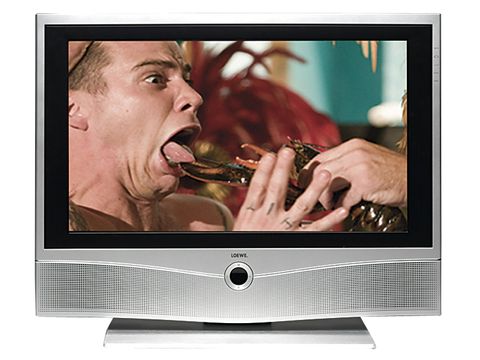 It's expensive, but at least it looks it

A great performer with hi-def material, but there are issues with black levels

At around £1,500, we think that Loewe is being overzealous with the asking price for its latest 26-inch LCD TV, the HD-ready Xelos A 26. As most 26-inch LCD TVs from major manufacturers have hovered around the £800 to £1,000 mark for some time now, there must be something special that the A 26 can deliver to justify its cost.

Judging this book by its cover, this Loewe looks the part of an high-end LCD TV. In visual terms, the Xelos A 26 is a great combination of style and reassuring solid build quality, coming in platinum or anthracite finishes.

Connections hit the HD-ready spot too. There's one HDMI, component video inputs, two Scarts (one RGB), and a PC VGA and S-video inputs. Welcome as the single HDMI is, it still has us wringing our hands. Two HDMIs should be standard issue for today's HD-ready TVs.

What you pay for

This minor gripe aside, the A 26's specs are as they should be, with a native resolution of 1366 x 768, brightness of 450cd/m2 and a quoted contrast ratio of 800:1. Also there are built-in analogue and digital tuners.

There are a respectable amount of features and tweaks at this Xelos' disposal that go some way to justifying that hefty price tag (on paper, at least). However, access to the set's features is hampered by the incredibly fiddly, joystick controlled remote and uncooperative onscreen menus.

We fed this distinctive-looking TV some hi-def footage (a recording of Star Wars: Episode III - Revenge of the Sith from Sky HD) and liked what we saw. The first thing that jumps out is the level of fine detail, which is among the best we've seen.

We're also pleased to report that this level of detail is continued with standard-def material, and is nothing less than impressive, kicking many similar-sized rivals into touch. Colours are displayed with natural tone and lovely intensity, without surrendering to gaudiness.

There's also a lack of picture noise, particularly with standard-def sources. There's a tad more dot crawl than we'd like to see, but that's splitting hairs, as most aspects of the A 26's pictures are excellent.

The major criticism we'd have to make about the Xelos A 26 is in the black levels department. Most standard-def footage looks fine, but this TV is tripped up by the demands of hi-def material. Blacks can degenerate into grey areas too quickly for our liking. We've seen far more impressive inky-black performances elsewhere to give this TV the benefit of the doubt. The same problem applies with DVD playback.

Still, this Xelos goes some way to redeeming itself with an admirable sonic performance. The subtle detail that it manages to eke out of the soundtrack of Revenge of the Sith is impressive. The dynamic range is also much larger than many TVs of this dimension - it's among the most credible performances we've heard from a 26-inch HDTV.

The Loewe Xelos A 26 ticks many of the right boxes: it looks great, pictures (mostly) on the button and it's a real sonic charmer too. But, we can't help but feel that, at around the £1,500 mark, the price is a little on the cheeky side - luxury item or not.

When you factor in the A 26's high price with the average black levels, we feel that you may want to shop around before taking the plunge, or at least see this TV in action before handing your credit card over.