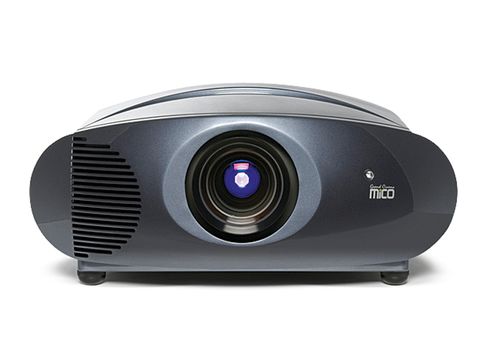 The Mico 40 delivers sharp pictures, and reduces your carbon footprint

The SIM2 Mico 40's big story is that it's the first SIM2 projector we've seen to use a trio of 'Luminus Phatlight' LEDs to illuminate the projector's separate red, green and blue components.

The logic behind moving to LED at the relatively low-end of SIM2's range is persuasive. Particularly headline-grabbing is the LED lamps' (conservatively) rated life span of 30,000hrs, enough to last you for what could reasonably be considered the full life of the projector. So no need for expensive replacements.

Not replacing lamps is also environmentally friendly, of course. As is the fact that the projector can be instantly shut down fully, without the usual post-shutdown cooling fan activity. And there's no mercury or lead in the lamps, nor PVC in the cabinet. Tree-hugging film fans can also bask in the fact that the Mico 40 uses less power than similar non-LED projectors.

LED isn't just interesting for its eco friendliness, though. For SIM2's PureLED light engine is also claimed to project a wider and more consistent colour range. You can also pulse LEDs extremely rapidly, allowing the MICO 40 to deliver an active colour cycle of 20x for each and every image frame, reducing colour artefacts and boosting contrast, greyscale and colours.

The only potential downside to the Mico 40's LED lighting as far as the spec sheet is concerned is its claimed brightness of just 700 ANSI Lumens. This is low by the standards of the £10k-plus market, and means this projector is only rated to deliver a fairly small 200-inch max image size.

However, after some quality time spent with the Mico 40's pro-grade picture adjustments, I didn't find this lack of brightness much of an issue on my 100-inch screen. In fact, the pictures look stunningly dynamic.

For starters, the projector's handling of contrast is exquisite, delivering deep but natural, detail-packed black areas alongside one of the most subtly-defined upper light ranges we've seen. There are pure whites, rich reds, vibrant blues, dynamic but real greens, plus every subtle tone between.

The Mico 40 is also truly outstanding when it comes to sharpness. Its 1080-line DarkChip3 DLP chipsets reproduce HD sources so sharply, in fact, that at times it's almost unnerving. For instance, while playing Call of Duty: Modern Warfare 2, what I at first thought was a red convergence issue turned out to be the Mico 40 simply revealing some red edging in the graphical design of the menus, done to give the lettering extra definition. I haven't seen any projector or TV before with enough definition to show the edging so clearly.

The extreme clarity doesn't fall down when pictures start moving either, as SIM2's PureLED system allows the Mico 40 to produce motion seemingly effortlessly, with no unnatural judder, noise or lag.

Wrapping up a truly wondrous performance from the Mico 40 is its running noise. Thanks to its efficiency, large chassis and onboard liquid cooling system, its ventilation fans are practically inaudible. You can, however, hear a pronounced buzzing noise from the projector, requiring a little care with where you position it in your AV room.

The only other negative issues I can raise about the truly mesmerising Mico 40 are that its remote control is uninspiring for such a high-end machine, and that you could secure yourself a little more detail and openness in dark picture areas if you splurge significantly more cash on a higher brightness projector.

But it's entirely probable that many readers will struggle to raise £11K, never mind thousands more. So there's no profit in picking holes in the Mico 40 for what more expensive projectors might do better.

I'll conclude, then, with my original gut feeling – that the Mico 40 is a stunning projector for its money, and one that even lets you feel good about your carbon footprint while you're using it.