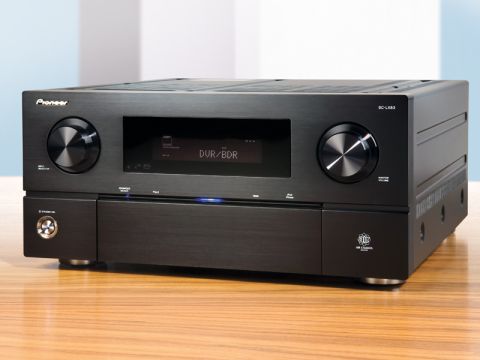 The SC-LX83's connectivity is excellent, with multiple digital and analogue options

Back in 2008, Pioneer launched the SC-LX81 and we liked it. We liked it so much, in fact, it won awards and everything. It used ICEpower Class D amplification developed by B&O and it was the best-sounding implementation of the technology we had heard. It scooped all the Oscars for style and was festooned with must-have widgets, too.

A year later came the equally good and stylish SC-LX82, but by this time the peer group had caught up in sound quality and surpassed it on sheer features. 'Righty-ho', said Pioneer's engineer's (albeit in Japanese), 'prepare to be blown away by 2010's SC-LX83.'

Out with the black

At just shy of £2K, the SC-LX83 is not cheap, but you know you have bought something special. It is a huge, superbly appointed box, and is still the most alluring AV beast on the market, even if its once piano black fascia is now a more conservative brushed satin.

The core power amplifiers remain unchanged, being the same Direct Energy HD ICEpower devices as its forebear. This is no bad thing, as Pioneer's implementation of them not only sounds great, but also claims to use a frugal amount of electricity – about a third of traditional Class A/B amps, in fact.

The brand's PQLS anti-jitter system has been further advanced and now works on bitstream signals, as well as LPCM multichannel and plain old, standard stereo PCM. With a compatible PQLS Pioneer Blu-ray disc-spinner, digital jitter over the HDMI interface is all but eliminated, resulting in a cleaner and more accurate audio transfer from player to amp.

Add to this a new suite of 32-bit DACs prior to amplification and the LX83 has all the potential to be a sonic diva with high-resolution material. Even if you are listening to compressed formats such as MP3, WMA, A2DP transfer Bluetooth audio or even old school, DVD-based Dolby Digital or DTS (ah, how passé…), Pioneer's latest Sound Retriever Air system is on hand to rekindle some depth and vibrancy to the sound.

And it comes as no surprise that this baby offers the full gamut of HD-audio decoding, 3D-compatible V1.4a HDMI connections and upscaling of any video to 1080p. Interestingly, it remains a stoically seven-channel amplifier, even though it features Dolby ProLogic IIz decoding for front height channels.

Instead, the rear-back output can now be assigned to front height duty, and there is a 9.1 channel line-level output suite should you fancy going for the full complement of rear-back and height channels.

Like its forbears, this is a top-spec THX Ultra2 Plus certified machine, complete with all the associated post-processing suites, and is fine tuned by Air Studios. But this receiver really excels on its controls and connections.

Yeah, everyone does Ethernet and USB networking, but the LX83 adds a fully A2DP-compliant Bluetooth dongle for wireless music streaming and control. Pioneer's genuinely revolutionary iPhone/iPod/iPad iControlAV App will also operate the bulk of this receiver's day-to-day functions. Moreover, it does so with a grace and animated style that makes traditional remote controls look like objects for the Antiques Roadshow.

The iControl AV software is inspired and allows your i-whatever to speak to the LX83 either directly over the Bluetooth dongle, or via your Wi-Fi router and hardwired Ethernet to the amplifier. Either way, it works seamlessly, offering genuine two-way communication, has informative videos and is simply the coolest thing in AV since Ice Age 3.

And that isn't all. The supplied standard remote control is not only well equipped with a backlit reversed LCD display, it is also an RF device. As radio frequency goes through walls to some extent, the amplifier can be hidden away in a cupboard or even a different room and still accept inputs from the remote.

Moreover, as well as being programmable to control the brand's and other makers' kit via IR, the manufacturer has then thoughtfully supplied two IR magic eyes for any other kit you might want to hide away. Top marks!

And, if you've still not had enough control magic, take note that the SC-LX83 offers full RS232 integration, plus IP control and a web browser interface as well. Not only does this ensure that it can be integrated with any IP-based custom install system, it also allows you to spy on it and see what it is up to while you are at work.

I suppose I am a little surprised that the LX83 doesn't have built-in Wi-Fi , but for serious networking (including critical firmware updates) you really do need a hardwire connection anyway.

More equal than others

Running the Pioneer's incredible MCACC setup and Room EQ software is a walk in the park and the beast is quickly ready to party. MCACC not only does all the usual parametric EQ balancing, but it also offers full band phase, reverb and standing wave control.

Just add a PC to download the graphs and perhaps a degree in systems engineering to fathom it all out, and you have a very comprehensive EQ system at home.

Thankfully, the full-auto mode works a treat and takes the sweat out of it. Given that the beating heart of the SC-LX83 is almost a facsimile of its predecessor, it is no surprise that the sound is just as clean and fast.

Bass effects have a crispness and dynamic attack that takes your breath away and the top end simply soars without getting harsh or acerbic. The midrange is buffed so clean and smooth it almost sounds a little laid back, but in reality this simply translates into an incredibly natural sounding dialogue.

The overall sound is hugely open and spacious, and effects from big explosions to ambient information are starkly detailed. The peculiar sound of the alien weapons firing in District 9 is fuelled with crackling electrical power, and the ensuing explosion of human targets is rendered suitably wet and squidgy.

The pod ship taking off under its own thrust is a cornucopia of audio effects – engine roar, the building collapsing, the wave of sand heading toward by-standers – and the Pioneer doesn't flinch at painting an incredibly detailed and defined picture.

Switching between full MCACC with phase control on and then all off reveals just how much mid-bass room bloom alone that the system eliminates. Switch the EQ back on and the soundstage simply swells in every direction, allowing each facet of the audio better definition and space.

The Blu-ray of AC/DC: Live at Donnington reminds me just what I found wanting on the old LX82: a bit of passion. However, it only does this because I think the new 32bit DACs have given back some much needed verve.

Given a handful of volume, the LX83 allows Brian Johnson to power into the room while keeping a tight reign on Chris Slade's enthusiastic use of the hi-hat back in 1992. As the disc progresses, the Pioneer really gets into the rock concert groove. While it's never going to throw the TV out of the window or drive a Rolls Royce into your pool, it does now wear denim jeans and a leather jacket when required.

The SC-LX83 builds on the strength of the predecessors in its winning stable, but it's packed with wow-factor features and sounds even more potent and exciting than its forbears. Detail, power, passion, cool iPhone widgetry and sumptuous style. What's not to love?