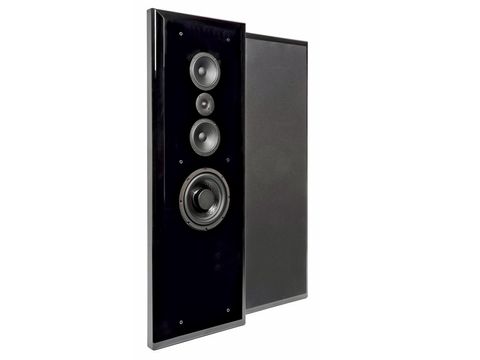 Designed to sit alongside a flatscreen TV, these wall hanging speakers offer a remarkable improvement in sound

The Screen 3 might be visually dramatic, but it's very successful in delivering genuine high-quality hi-fi sound without physically intruding into the room. There is a slight tendency towards bass 'thump'

The main stock-in-trade during the current regime, however, has been a well received collection of loudspeakers. The Screen range is new and very different from the run of the hi-fi loudspeaker mill.

The three Screen speakers (logically designated 1,2 and 3) are designed to look just like a flatscreen TV and hang on the wall like the latter, albeit rotated through 90 degrees.

In fact the £2,800 per pair Screen 3, with its picture frame finished in high-gloss black and a matt black grille, does indeed look remarkably like the large Pioneer display which took up residence here some nine months ago.

The world rushed out to buy flatscreen TVs because it didn't like large glass 'n' plastic boxes cluttering up the lounge. Revolver hopes it can be persuaded to do the same in order to avoid taking up floor space with loudspeakers too.

Although it flies in the face of normal practice, there's no reason why a skilled designer can't make a flat-against-the-wall speaker work very well. At least the room reflection boundaries are pretty well set in stone.

The Screen 3 is a full three-way design, using a 240-millimetre bass driver plus twin 165-millimetre midrange drivers (125-millimetre cones) above and below a 25-millimetre soft dome tweeter.

Sealed box loading should help keep the bass under control and the modest 11-centimetre depth is achieved by using a rather special 'inside out' bass unit, with the voice-coil and a compact neodymium magnet arrangement mounted in front of the 180-millimetre paper cone.

Build is impressive. Our samples came in gloss and matt black, but a wide range of alternative finishes is also available. Twinterminal pairs are fitted on the rear panel. Wall brackets are normally supplied (though we had to make do with the floor), and a freestanding stand is under development.

From a traditionalist perspective, the Screen 3 might seem an unlikely prospect, but in fact it worked rather well, with a fine overall tonal balance and very believably stereo images.

There is a bit of mid-bass excess, giving the sound a tendency to thump at times, depending on the material, but we guess this is likely to be considered a plus by movie enthusiasts, so the hi-fi enthusiast shouldn't complain too much. (Perhaps music lovers might prefer the slightly smaller Screen 2, with its 200-millimetre bass unit?)

Although it does err a little on the warm 'n' heavy side of strict neutrality, cabinet coloration is very low, the midband voicing is excellent and the top end seemed very well judged. True, the presence zone might be a little too restrained for some tastes and this does reduce the degree of openness somewhat, but makes some sense from an AV perspective where 'loud' is usually high on the agenda.

Used purely in stereo for a mixture of music and radio, the Screen 3 is remarkably effective and impressive, as well as competitive with its more conventional rivals in almost every way, while the wall-hung positioning somehow made TV sound even more coherent.