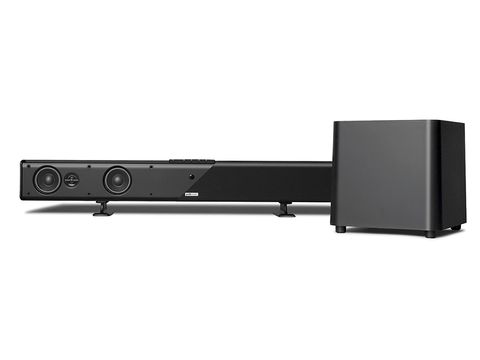 As with all soundbars, the SDA 1HT struggles to deceive the ears but overall sound quality and ease of use make this a winning choice for flatscreen audio

Polk's 'Instant Home Theater' speaker combo, the SurroundBar SDA 1HT is yet another attempt to add oomph to the weedy audio output of most flatscreen TVs.

It consists of a soundbar to mount under the screen and a powered subwoofer that can go anywhere you like, because it connects to the soundbar wirelessly.

The advantage of the Polk system over some of its rivals is that it learns to respond to commands from your television's own remote control, so you don't need an extra handset, and it involves only one cable, a stereo phono.

Okay, the system doesn't offer true rear surround functions, but this is more about achieving power than full cinema subtlety.

The Polk SurroundBar is ridiculously easy to set up – 'Instant Theater' almost – and if you don't want to wall mount, it can be stood on little cradles.

It's stylish and discrete, too, and doesn't clutter your room with extra wires or remotes.

The 6.5in, 130W subwoofer delivers a lot of bass oomph, with the six-driver SoundBar contributing a full mid-range, and clear treble.

Don't expect this system to give you a true surround effect. Polk's SDA (Stereo Dimensional Array) tech certainly does a fair job of filling a room, wrapping sound around the listener from the top and the sides, but this only really works if you're sitting in the 'sweet spot'. Even then it's no more convincing than other psycho-acoustic FX.

You could get a budget amp and full 5.1 speaker system for the same outlay – but, then, you couldn't set that up in five minutes...