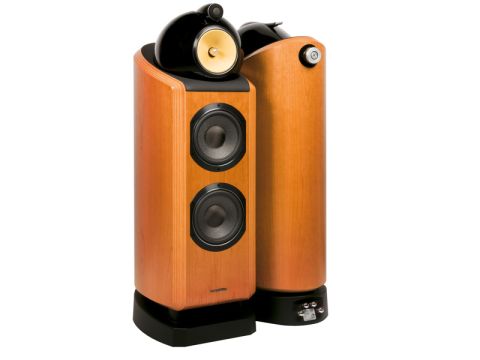 It's easy to track this new and imposing £11,500 three-way 802 Diamond model right back to the Nautilus 802 in 1998. The two models look superficially almost identical and you'd be hard pressed to tell them apart from across the room.

Indeed the only visual differences apparent in these latest series-Diamond variations seem to be a little extra bright trim around the drivers, a shiny phase plug in the centre of the midrange driver, smaller dustcovers for the bass units and revised signal input terminals.

However, if the outline and basic cabinetwork looks very familiar, much of the internal engineering has now undergone two distinct stages of improvement. In 2005, we tested the 802D, a successor to the original Nautilus 802 and this speaker's immediate predecessor.

Seven years had given the people working away in Bowers and Wilkins' Research Labs – idyllically located in Steyning, a few miles inland from the main Worthing factory – plenty of time to work on upgrades.

The most important of these was the introduction of a diamond dome tweeter on the more upmarket models, alongside a simplified crossover network with superior components, improved bass unit diaphragm material and so on.

911 of the speaker world

All those features and more (along with many new ones too) have been carried through to the latest generation of 800s, now dubbed the 800 Diamonds because all the models are now equipped with diamond diaphragm tweeters.

Once again, Bowers and Wilkins sees the Porsche 911 as its model – a car whose basic silhouette remains essentially unchanged from decade to decade, while the underskin engineering is continuously under development and improvement. This new 802 Diamond might look very like a Nautilus 802 or 802D, but most of the hidden bits have changed significantly.

The diaphragms might be much as before, but the motors driving them have seen big changes. The manufacturers have a very extensive collection of computer modelling techniques, including the highly regarded Klippel suite and these have provided the tools for reducing motor distortion and maximising sensitivities.

Rather, the 802 Diamond's twin 200mm bass drivers mount twin neodymium/iron/boron alloy magnets actually inside the voice coil, improving the field symmetry and lowering distortion. And the new motor considerably reduces the reflecting surface immediately behind the cones. A new four-magnet motor is also used for the diamond dome tweeter.

Whether or not you consider the 802 Diamond's appearance attractive, the whole design is firmly based on 'form follows function' principles. Each of the 'ways' has its own specifically optimised enclosure, mechanically isolated from each other via lossy mountings and the whole thing sits on a cast-alloy plinth, that houses and isolates the crossover network and the twin terminal pairs.

The latter are now made from oxygen free copper (OFC) and give superior results to the more easily machined brass that is almost universal. The speaker actually comes fitted with ball-castors, but a reversible spike/foot kit with the option of nylon studs or massive, wicked spikes is also supplied.

The plinth is shaped to mimic the shape of the curved and reasonably slim enclosure, while the spikes are set well in from the sides. Lateral stability is, therefore, not great, especially with that massive Marlan 'head' well off the ground, but its total weight of 72kg is unlikely to be knocked over accidentally.

The bass enclosure is formed from a single piece of 26mm plywood, shaped in a continuous curve around the sides and back. It comes in a choice of three finishes: rosenut or cherry wood veneers, or high-gloss piano black.

A port fires downward between the base and the plinth to add further bass output. The midrange unit is virtually unchanged in this model. It's unique 'free edge' design known as an FST (fixed suspension transducer), in which the outside edge of the 140mm diameter woven Kevlar cone rests against a foamed polymer damping ring.

This is housed in a sizeable and very heavy teardrop shaped sub-enclosure, made from mineral-loaded Marlan (a mineralloaded polymer) and finished in high-gloss black. The internal shape is essentially a combination of a sphere and a cone, which is claimed to be very effective at dissipating the rearward radiation from the driver.

A substantial tapered metal tube on the very top, again smartly finished in high-gloss black, houses the 25mm tweeter and is designed to absorb the rearward radiation from the diamond diaphragm.

Diamond is very hard and when fashioned (artificially, using a technique called vapour deposition) into a tweeter dome its high stiffness pushes the first breakup mode up to 74kHz – way above the audio band. The main problem is that it's also very expensive (and incidentally rather fragile in the eggshell-thin form used to keep the mass low).

A small removable (magnetically held) mesh grille is supplied to cover the diamond dome; while this does compromise the sound a little, it's probably best left on as an accident here could be rather costly. Those who prefer to hide their drive units can use either or both of the fabric covered grilles supplied for the midrange and bass drivers, the latter held magnetically in place.

All this advanced speaker technology doesn't come cheap and the 802 Diamond is unquestionably an expensive speaker. It also costs significantly more than its predecessor, which presumably helps pay for the considerable engineering resources that underpin the Bowers and Wilkins operation.

But the more significant factors are simply the effects of inflation and the fall in the value of the pound – many of the components used in manufacture are priced in Euros or Dollars. Although the 802 Diamond might seem costly, but the whole 800-series Diamonds are actually very good value in the context of most of today's high end offerings.

It all depends on whether you can accept that a single well-resourced brand is as capable of creating genuine high-end models as it is of designing very competitive mainstream models.

Not unexpectedly, the in-room measurements showed that this speaker should be kept well clear of walls, just like its predecessor.

Given the five year gap, it's impossible to say for sure just how much of an improvement the 802 Diamond offers over its 802D predecessor especially as the 802D's bigger and rather superior 800D acted as a regular reference loudspeaker through much of the interregnum.

What is absolutely certain is that the 802 Diamond is a truly exceptional loudspeaker and indeed one that even improves on the earlier 800D in several significant respects. It might not match its older, bigger brother in terms of bass grip, authority and drive – arguably the 800D's biggest strength – but the overall out-of-thebox transparency, low level articulation and stereo image precision are all clearly superior to anything the previous generation could offer.

As the measurements showed, this latest 802 Diamond is a couple of decibels brighter than its predecessor, relatively speaking. This is clearly audible and also mostly welcome, as the top end always sounds almost uncannily clean. But it also means that partnering components need to be of comparably high quality, as this speaker takes no prisoners and all too clearly reveals any shortcomings further up the chain.

It was no surprise to find that vinyl, was often preferred to CD, for example. Although the in-room response traces do indicate some unevenness, this doesn't seem to result in significant levels of coloration.

Two factors are likely to be responsible. First, any enclosure-generated colorations are exceptionally low: this is very obviously audible in the speaker's vanishingly low 'hash' floor, which makes the gaps between the notes as clean and clear as the notes themselves. Secondly, the overall coherence and timing right across the whole audio band is quite outstanding.

The acid test for any speaker is to get it onto your home turf and play familiar material through and from familiar components. The 802 Diamond has a wonderful ability to distinguish between FM radio, CD and vinyl sources and then to go further by clearly revealing the quality of the recording. This is indeed a genuine monitor.

Anyone who speculates that Bowers and Wilkins might be hidebound by its very impressive engineering resources, only has to spend an hour or two with a pair of 802 Diamonds. Superb imaging, dramatic dynamic range and excellent total coherence, this speaker has unquestionably been designed by people who listen to and love music.

It's undoubtedly the best Bowers and Wilkins speaker that we've heard to date. That all this has been achieved through painstaking refinement rather than headline-grabbing radical innovation is also rather appealing.