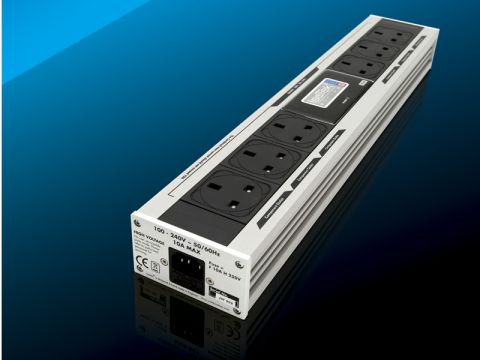 We’ve heard bigger leaps in performance from other mains filters, but they all cost considerably more than this one. Even with ‘standard’ mains leads, this is a worthwhile addition to a decent hi-fi set-up

IsoTek certainly didn't invent the mains conditioner (people were selling them before the company started trading), but it has certainly made a big mark in aftermarket mains kit.

This must be partly due to the sheer range of products available; at the time of writing, the company's website lists over a dozen models at a variety of prices.

But there are plenty more in the pipeline, including the latest model Sirius, which is part of the new 'EVO3' range.

Set to replace the GII products, Sirius is a simple enough proposition, a six-way distribution board, good for ten amp output (2,300-watt) with filtering and protection built-in.

Unlike the PS Audio Quintet, it doesn't include any switching features, but then it is considerably cheaper. It does, however, come with handy wall-mounting brackets.

£250 might still seem a lot of money to throw at a 'mere' mains accessory. But it's an expense that can easily be justified in the build quality of the Sirius, which is very high. The basic chassis is a substantial piece of aluminium extrusion, on which are mounted high-grade sockets.

The mains inlet is a standard IEC type, which IsoTek naturally recommends should be fed via one of the company's own mains leads. The clever stuff is inside, on a modest-looking circuit board which carries all the filtering components.

Arguments rage in the nerdier corners of hi-fi-dom about how best to filter mains supplies. The Sirius adopts a relatively non-intrusive approach, with mostly shunt-connected components that are not 'in the way' of the mains voltage.

There are also protection devices capable, apparently, of handling 22,500 amps, a claim we're happy to take on trust in the absence of a sudden lightning strike to use for testing.

Rather ingeniously, IsoTek has also come up with a simple, but effective means to provide a degree of isolation from socket to socket, so that mains noise generated by one component does not significantly affect other components plugged into the same board.

This is not always taken into account - certainly not in any of the cheaper mains boards we've seen.

It is only honest to add to any review of a mains filter or conditioner that your mileage may vary.

Subjective results can, indeed will, vary significantly from system to system, location to location and even time to time (depending on just how much noise is on the mains and how sensitive the connected kit is to it). But we tried a variety of hi-fi components, in three locations, with the Sirius and were very favourably impressed.

Effects were most pronounced with source components, while power amplifiers - at least, the ones we tried - were less affected, showing just a small improvement in general subjective cleanliness of presentation and image.

But we noted a similar improvement to four quite different CD players, each of which seemed to produce sounds from a quieter background when nourished via the Sirius. Small, subtle details were more in evidence and images both tightened up and extended a little further in all directions.

An elderly, but upmarket FM tuner benefited similarly and we were once again slightly perplexed to hear a subtle improvement also from an LP player - this is just the motor and control circuit we're talking about here, quite independent of the phono amplifier. The latter was also given a touch more detail and solidity in its sound, but that's a little easier to explain!

None of the improvements wrought was massive and yet when we fed an entire system through the Sirius, it was given a distinct lift in overall musical performance. We would not hesitate to suggest this as an effective upgrade for any system.

It's effective, well priced and clearly makes the case for adding mains products to hi-fi systems.