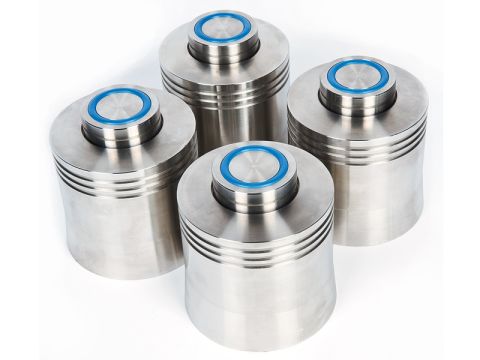 Even with high-end equipment, this is a lot to pay for 'just' feet, but used as an isolation solution for a complete system they do bring worthwhile benefits

It's not hard to find expensive accessories in the hi-fi world, but even by the standards of the most esoteric tweaks, a set of Alto-Extremo NeoFlex isolation feet looks like a bit of an indulgence.

We looked at some much cheaper isolation devices which seemed to work pretty well, so these will have some convincing to do.

The headline attraction of these feet is that they use opposing magnets to support the weight of the equipment placed on them. High-strength neodymium magnets are used, built inside a robust stainless-steel housing, which stands eight centimeteres high and weighs 4.5 kilograms, with the central piston pushed upward by the magnets.

It is restrained from popping out at the top, while at the bottom an adjusting screw allows setting for a range of loads from 0.5 to 15 kilograms, so that the foot operates with the piston slightly depressed under normal conditions.

Side-to-side stability is provided by two internal sealing rings which also give a useful degree of air damping.

Interestingly, Alto-Extremo's other (cheaper) feet do not use magnetic or spring isolation, relying instead on point contact on an internal hard ball. Magnetic levitation is a very useful technique, though, giving a low resonant frequency of just a few hertz, which means there will be useful attenuation of vibration across the whole audio band.

This isn't the first time the technique has been used in audio support components, but it's certainly a rarity and will always involve both very strong magnets and some precision engineering, hence the high price.

Incidentally, Alto- Extremo has built in very efficient magnetic screening, so those worried about the effects of stray magnetic fields on their audio components can rest assured. Even an inch or two away, the field is barely detectable.

Bearing in mind the considerable cost of a set of these feet (effectively £1,598, since a pair won't support much!), it's unlikely they will be used beneath anything less than upmarket kit.

We tried them with a Meridian 808 CD player, a couple of turntables and some amplifiers, both solid-state and thermionic. Perhaps, not surprisingly, their greatest effect was with the turntables, which as a breed absolutely require isolation from structure-borne vibration to work well.

What did surprise us was how much of an effect they had on a Pink Triangle turntable, which has highly effective suspension already built in. Supported on four NeoFlex feet, it seemed distinctly more precise and detailed.

With electronics, both sources and amps, the effect was less, but we still heard a small improvement in precision. The Meridian CD player was, to our ears, the least affected piece of kit and we're not sure we would bother, but a vintage Mark Levinson preamp benefitted quite noticeably, with some extra clarity in the high treble and just a shade more definition in the (already excellent) bass.

Overall, our most successful experiment with these feet came when we supported an entire system rack on them. Having the turntable on the top makes the assembly feel a little perilous, but the damping offered by the feet makes wobble highly unlikely, unless someone is walking very heavily nearby.

Set up like this, we obtained very good results, compared with the same system floor-bound and consider that a suitable recommendation. Any other way and they are truly an alarming proposition financially!