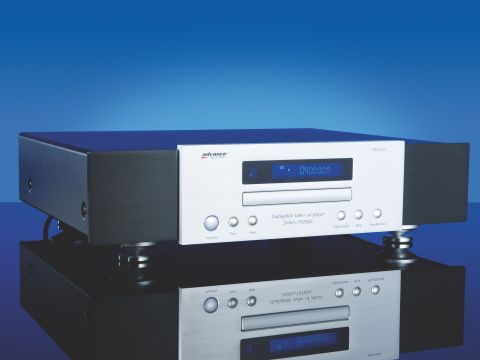 Established as recently as 1995, Advance Acoustic was originally a loudspeaker brand, which added electronics in 2002. The MCD-204 is one member of its second tranche of electronics components, replacing the MCD-203 M II.

The products are designed locally and built offshore. Respectively, this means France – the parent company is Advance Paris – and China, which helps explain the unusually attractive pricing.

For those familiar with the MCD- 203 Mk II, the new model has a 'heavier' mechanism, while the D/A converter 'chippery' has been improved to enhance resolution to 24-bit/192kHz (this is the resolution of the chips, not the musical output, which is red-lined at 16-bit/44.1kHz by definition).

Other improvements are aesthetic, including a stunning black and silver front panel inspired by the MAA-705 monoblock and the MPP-505 preamp. The remote control is unexciting visually, but it is based on a die-cast aluminium carcass, so it can't easily be faulted.

The MCD-204 is built around a rigid, partitioned chassis, providing physical isolation between the different functional blocks and reducing the possibility of interference between them. The metal mechanical component is suspended, then fixed on to a double frame to avoid vibrations during playback.

The D/A stage uses two analogue devices 24-bit/192kHz Delta Sigma D/A converters. Where other players would interface the DAC to the outside world using a simple microprocessor-based output stage, the MCD-204 uses something much closer to a full-blown audiophile preamplifier output, whose active devices are a pair of 112AV7 low-signal level valves.

The player can read CD, CD-R and MP3 CDs and is also compatible with HDCD-coded discs. There are single-ended and balanced analogue outputs and digital outputs in optical, coaxial and AES-EBU flavours.

What makes the MCD-204 different is that it has a valve output stage at a price that would be typical of a mainstream solid-state design.

We're not fully convinced that the player quite makes the most of what could be a spectacularly good output stage, but it doesn't do badly and the hardware complement under the lid is undeniably impressive.

The MCD-204 behaves like most CD players, except it does take a minute or so before it becomes responsive after you hit the power button. This is the time needed to kick the tube output stage into life – a count-down timer keeps you appraised of the situation. Left to its own devices, the player will eventually power itself down, which is a fashionably green thing to do.

The player was run in and warmed up prior to use, but it went through these standard procedures quickly and without dramatic changes in sound quality. For early listening the balanced output was used (with one-metre Transparent cables driving a Krell FBI), but it had no obvious audible benefit in this arrangement, though there might have been had longer cable runs been involved.

Either way, the MCD-204 is a clean, tidy-sounding player, easy on the ear and without obvious vices, though arguably it's slightly 'slow'-sounding (a finding that is sometimes associated with high-jitter levels). It generates a warm, full sound, harmonically rich and to this extent involving and informative. This is the valve heritage.

Imagery was expansive and stable too, in both the width and depth planes, but where we feel slightly short-changed with the MCD-204 is with its snap and on-the-ball timing of the very best disc-playing hardware.

The player tends to be most impressive with large-scale material (Verdi's Requiem is one example) and with orchestral material generally. It is less impressive with some of the non-classical material. The snap and propulsive timing that can make Mark Knopfler such an exhilarating performer, or accentuate the darkness of Sara McLaughlan's voice seems diluted on the MCD-204.

Nevertheless, this player never ceases to impress us. For example, it does wonders with Christianne Stotijn's stunning mezzo-soprano voice and Fleischer's Beethoven from an old, but vital recording on CBS of the Beethoven Piano Concertos, with the Cleveland Orchestra.

Dedicated CD players are becoming less common in the headlong rush to compressed audio and iTunes, so this player will be a welcome addition to the ranks of affordable CD players – even without the hybrid technology.

But the balanced output doesn't show any obvious advantages over the single-ended and, as with many valve-based designs, there is something slightly lazy about the sound. That said, we don't doubt it is a lot better than its predecessor. Musically, it is a qualified hit, easily good enough for a well-deserved recommendation badge.