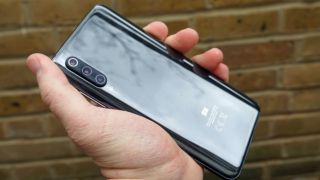 The Xiaomi Mi 9, above, is about to get a successor (Image credit: Future)

The Xiaomi Mi 10 and Xiaomi Mi 10 Pro are very nearly here, as the maker has confirmed on Twitter that it will be announcing the flagship phones on February 23 at MWC 2020 (a major smartphone-focused trade show).

You won’t even need to wait that long to get official news on them though, as while that’s the global launch, the company is actually unveiling them in China on February 13 via an online-only event. So specs and images should be available from then, but hands-on impressions likely won’t arrive until February 23.

In fact, though, you don’t even need to wait until the earliest of those dates to see official images of one of the Xiaomi Mi 10 models, because as well as confirming those dates the company has also shared a marketing image of the phone on Weibo (a Chinese social network).

You can just make out that one of the four lenses is marked as being 108MP, which makes us think this might be the Pro model, as that’s a high number, and some leaked images line up with these.

Having said that, not all leaks are in line with it, and at least one source has said to expect a 108MP camera on the standard Xiaomi Mi 10 too, so we’re not 100% sure which model this is.

In any case, you can also see a large curved screen with very little bezel and a punch-hole camera in the top left corner.

We don’t officially know the rest of the specs and features, but rumors suggest the Xiaomi Mi 10 and Mi 10 Pro will both have a top-end Snapdragon 865 chipset, along with 6.5-inch screens and 90Hz refresh rates, so they certainly sound set to impress.

They might impress in terms of price too, with Chinese pricing rumors pointing to much lower costs than typical high-end phones. With the global launch less than two weeks away at the time of writing, and the Chinese launch even sooner, we should know the truth soon.