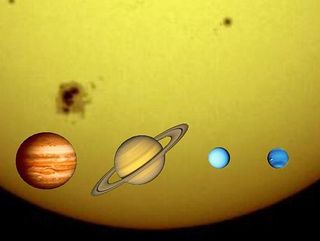 Space, yesterday. To some scientists, this looks like a game of snooker

Most of us don't spend much time thinking about pavements, but Professor K. Wayne Lee does - and he reckons they could help light our streets, melt ice, heat buildings and defend the Earth against lizard attack. Well, maybe not that last one.

The University of Rhode Island professor is investigating ways in which pavements can become solar power generators, and his most futuristic idea is to replace the tarmac completely: instead, roads could consist of linked electronic blocks consisting of photovoltaic cells, sensors and LED lights that generate electricity, know when they need to be fixed and light up like Michael Jackson's Billie Jean video. We guess that'll be worth a few electrocuted dogs scattered around the lamposts.

UK astronomers have found a faraway star system that looks like, "and may have once behaved like, a game of billiards," UPI.com reports.

The system consists of a red dwarf, a white dwarf and two gas giants, and apparently "it's hard to escape the image of this system as being like a giant snooker frame with a red ball, two colored balls, and dwarf white cue ball". Unless you've actually played a game of snooker, that is.

Rise of the (toy) robots

You're worried about burglars. Do you (a) invest in decent locks and an alarm system, or (b) buy a toy robot, hack it a bit and use it to monitor your house whenever you remember to do it? If you chose (b) you may be Robert Oschler, a Floridian programmer.

CRAFTY CAMERA: Rovio's mobile webcam is a top geek toy, and now it can be a guard dog too

He's tweaked a Rovio, a Wi-Fi-enabled webcam robot, and turned it into a guard dog. As Help Net Security admits, "this setup may not be reliable enough for guarding, say, a bank".

Wave to the webcam and we'll waive the bill

Fancy a dirty weekend for free? Just do your stuff in front of a webcam. That's the latest wheeze from Berth Milton Jr, the "Swedish smut king" who owns Private Media Group. Milton wants to roll out 100 sex-themed five-star hotels around the world. According to the New York Post, "the idea is to give free rooms to frisky hotel guests in exchange for the right to broadcast their dalliances to paying customers live over the web."

SMUT SITE: This is pretty much the only bit of the Private website we can show you without getting into trouble

Things that make you go wee

Good news for Kings of Leon: if your sex is on fire, you'll soon be able to diagnose it with your mobile phone. The Guardian reports that in order to cut the UK's rising rate of sexually transmitted infections, The Kids will be able to wee or spit on "a computer chip about the size of a USB chip".

They'll then "plug it into their phone or computer and receive a diagnosis within minutes." The bad news for people whose bits are burning: the kits won't be on sale for another seven to ten years.

Liked this? Then check outTwitter trials are no joke

Sign up for TechRadar's free Weird Week in Tech newsletter
Get the oddest tech stories of the week, plus the most popular news and reviews delivered straight to your inbox. Sign up athttp://www.techradar.com/register