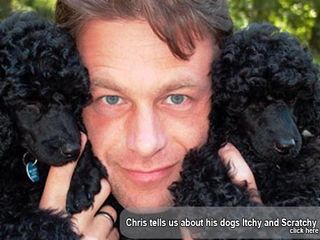 "Connect and share the animal in your life" is the tagline of Mypetbook, which goes on to describe itself as "just like Facebook but for pets". So expect your rabbit to dramatically quit the site over privacy concerns about the usage of its photographs shortly after signing up.

If you live in an oppressive inner-city bedsit and your landlord won't even let you have a goldfish, don't worry - any pet-less readers out there can still sign up and join in the pet-anecdote fun, with plenty of example wild animals available to be registered as surrogate pets, if you like animals but aren't yet ready to commit to the challenge of keeping one alive.

Live out your pet-having dreams, and then, once the novelty has worn off, spend your time browsing profiles for photographs of hot pet-owners.

If you saw all the fuss generated by low-budget Oscar-winning film The Hurt Locker and decided, on a whim, to download a legally dubious copy off the internet simply for research purposes and to see if your opinion tallied with that of the Academy Awards panel, you might want to not accept any signed-for letters over the next few months - the lawyers are coming.

According to The Hollywood Reporter, the distributor of the film is about to sign off a multi-million dollar copyright suit which could end up targeting "thousands" of avid BitTorrent users that ISPs named as Hurt Locker downloaders.

HURT FEELINGS: The "I wouldn't have paid to see it anyway" excuse will be rolled out en masse

In previous cases, those found guilty have been charged "settlement fees" numbering in the thousands of dollars in order to call off the prosecutions. Which still works out cheaper than paying for popcorn and a coke at a UK cinema.

Four students have raised nearly £16k after signing up to a crowd-sourcing, fund-raising website and announcing the aim of making an "open source" competitor to Facebook. With several high-profile media people throwing large sulks over Facebook's overly-complex privacy rulings, the boys' scheme arrived at a perfect time - and they raised the cash within days.

16,000 THANKS: We have an idea for a blog. Donations gratefully received

The end result is, or at least might eventually be, Diaspora, but that's not the interesting thing. The interesting thing is that four students netted themselves a massive pile of cash after floating an idea on the internet. Just don't spend it all on office equipment and rent, boys. That's always been the big mistake.

The mighty state of North Korea has apparently achieved a significant first in the history of science - nuclear fusion. The stuff of legend, successful nuclear fusion is the ultimate dream of every man who's ever progressed further than GCSE level science, providing us with endless stacks of cheap, clean power.

Apparently North Korea has it cracked, in a development announced, according to the BBC, on the birthday of the country's founder Kim Il-sung. The international community is said to be demanding "pics" or will continue to believe that it "didn't happen".

Liked this? Then read 20 websites that changed the world