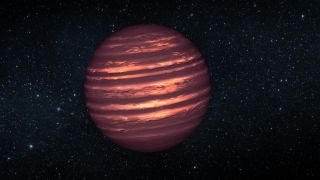 Not every star is equal. From blue supergiants to pulsars, the Universe has a huge diversity of stellar possibilities. However, there's one category that was discovered 20 years ago but we still know very little about.

Brown dwarfs are essentially failed 'starlets' - they're too large to be called planets but too small to be stars. They form in the way stars do - by a collapsing cloud of gas and dust - but it never gets dense enough at their cores for nuclear fusion to begin and the star to 'ignite'. As such, they're dark, cold, and really hard for telescopes to to spot in the night sky.

The question of why they never ignite is a tricky one, and it's what researchers from the University of York are probing with the help of one of the world's most powerful lasers. They used the Vulcan Petawatt laser to generate a "lump" of plasma that recreates the conditions inside the cores and study it.

By measuring x-rays emitted from the plasma lump, the researchers were able to build up a profile of how dense plasmas form inside brown dwarfs, furthering our understanding of the microphysics that takes place inside these objects.

"The Vulcan Petawatt laser is one of the few places on Earth where we can produce conditions close to those at the centre of a brown dwarf," said Nicola Booth, lead author on a study reporting early results from their work, published in Nature Communications. "We hope that with the predicted future observations of brown dwarfs, our experiments can help with the understanding of how energy is transported in these 'starlets'."