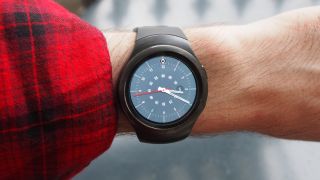 Trying to pay for holiday gifts with your Samsung Gear S2? Well too bad. It won't get Samsung Pay until next year.

According to this tweet from the Samsung Mobile US Twitter, Samsung Pay will be on wrists during an unspecified date next year.

There's no word on what's causing the delay but we've reached to Samsung for a comment.

In the meantime, you'll just have to pay for things the old fashioned way.