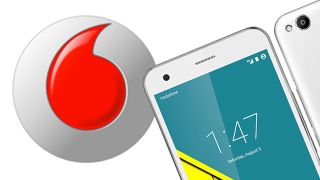 Vodafone India has come up with new plans aimed at feature phone users that offers unlimited calling benefit to users in Andhra Pradesh circle. This plan is similar to plans announced by Airtel and Idea to compete against Reliance Jio Rs. 149 plan.

Over the past few months, the telecom sector in India has become extremely competitive due to Reliance Jio’s launch. The youngest telecom operator in India had triggered a tariff war with its lucrative plans that offered free voice calling and unlimited data.

However, the new plans from Vodafone are different from the recent plans revealed by the operators. The Rs. 181 plan comes with unlimited local and STD voice calls and unlimited 2G data with a validity of 28 days. At a time when users are getting unlimited 4G data, offering 2G data is very strange. Reliance Jio, on the other hand is offering 84GB 4G data for Rs. 459.

Under the Rs. 195 plan, Vodafone is offering unlimited local and STF voice calls and 1GB of 2G / 3G / 4G data with a validity of 28 days. The two new plans from the company are aimed at 2G users and users who mostly make calls only. While the Rs. 181 plan does not come with any restrictions on voice calls, the Rs. 195 plan comes with a restriction of 250 minutes per day and 1000 minutes per week.

Bharti Airtel, India’s largest telecom operator had recently announced a plan with a tariff of Rs. 199 under which, the company is offering unlimited local and STD voice calls and 1GB 2G / 3G / 4G data with a validity of 28 days.

Similarly, Idea Cellular has also introduced a plan with a tariff of Rs. 198 under which the company is offering unlimited voice calls and 1GB 2G / 3G / 4G data with a validity of 28 days. It is to be noted that Idea Cellular and Vodafone are working on a merger.