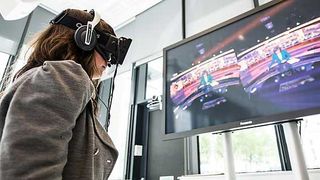 BBC and VR could be a major new project

The BBC's chief technology officer is looking at VR and Ultra HD as the most exciting projects in the future of one of the world's most iconic broadcasters.

Speaking about the challenge of an ever-changing television landscape, Matthew Postgate outlined in a blog how using the internet to deliver content, rather than just the airwaves, brings the next generation of television closer.

"We will increasingly use the internet to deliver programmes and services to you in the future – whether that's to the big screen in the living room or the smartphones and tablets scattered over the house," writes Postgate.

"This opens the door to entirely new forms of content that are much more data-intensive than audio or video – things like Ultra-HD or virtual reality for example.

"I'm not saying these technologies will take off overnight, or that they'll take off at all for that matter, and traditional broadcast technology will continue to be critically important for many years," he added

"But using internet technologies in new ways is another major opportunity for the BBC's engineering, digital and editorial experts to pave the way.

"...what kinds of experiences could we provide in 2020 or 2024 if the nation had universal high speed broadband and a broadcast infrastructure designed to take advantage of it?"

The BBC can make a genuine claim to be perhaps the greatest innovator in the broadcast world, and has already trialled Ultra-HD (also known as 4K) and VR as it looks to work out how to deliver the next big steps in broadcasting.