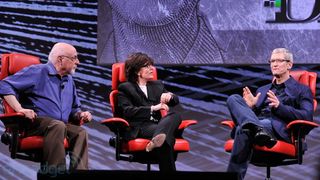 Cooking up a telly?

Tim Cook has said on stage that TV is an "area of intense interest" for Apple, hinting that it could well be developing the standalone TV set Steve Jobs hinted at in his biography.

Speaking at the All Things Digital Conference in California last night, Cook said of the company's TV plans: "We are going to keep pulling the string and see where this takes us."

In a nod to the current Apple TV set-top box - which he referred to as 'a hobby' previously - he said: "We're not a hobby kind of company, as you know. We've stuck in this."

But pressed on whether Apple would make the iTV, he said: "You were right. I'm not going to tell you."

He did say that TV is something "many people would say that this is an area of their life that they aren't pleased with," just as Steve Jobs did before him.

He also reiterated Apple's key questions before entering a product category: Can we control the key technology? Can we make a significant contribution beyond what others have done in this area? Will this product be one that we want?

He added he doesn't think Apple "has to own a content business", concerning rumours it's had trouble getting studios on board.

Apple sold 2.8 million Apple TV set-top boxes last year, and 2.7 million already this year. He also added the company will be 'doubling down' on Siri (hinting new features and enhancements are coming soon), and said to "stay tuned" when asked about Facebook integration, saying he has "great respect for them".