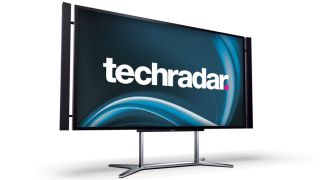 Always read a review before buying a new TV!

No one likes 4K more than me and that is a fact.

So it's with a great deal of enthusiasm that I arrange the reviews of as many 4K TVs for TechRadar as I can get my hands on.

We write about 4K content too – we're desperate for Netflix to get its 4K streaming out the door and can't wait for YouTube to up its Ultra HD game too. And where's that 4K Blu-ray standard at?

Now, in the UK, 2013 4K TVs from headline brands like Sony, Panasonic, Samsung, LG, Philips are currently weighing in at between £3000 and £6000 depending on which brand you choose, which compromises you make and whether you opt for 55 or 65-inch screens.

The 2014 models will probably start flowing in at around the £2000 mark, which is a bit more like it.

Well yes it is. Sort of. It's fab to see 4K panels making their way down to more sensible and affordable price points. But before you set aside the cash and order one, consider this.

4K screens have four times as many pixels as a full HD TV which makes them super-beautiful and hella-sharp. But the problem remains the lack of content. 4K broadcasts are a way off yet, streaming services are talking 4K but not yet delivering. There are still no 4K Blu-rays. It's a problem.

This lack of content really isn't a huge issue for high-end 4K TVs from the likes of Sony, because as Steve May said on TechRadar in October, their upscaling is positively Asgardian in its brilliance.

How 4K TVs upscale from HD

Rather than rely on linear scaling, top chips in high-end 4K TVs dynamically address local image databases in order to interpolate the extra data needed for the 3840 x 2160 picture. The

, for example, employs a database of 120,000 textures in order to guesstimate what extra details to add.

It means that you reap the benefits of the increased resolution even without native 4K content, and when that content arrives, all the better.

But this upscaling performance requires expertise, technical nous and R&D, not to mention huge investment. I've seen 4K TVs that don't upscale well and the pictures on them look so inferior to a full HD picture as to make their existence entirely senseless.

Will a £500 55-inch 4K TV from budget-brand Kogan upscale HD well enough to make it worth buying in a world without 4K content when you could spend the same money on a top-notch 1080p screen from a trusted brand? Hmmm.

Will any cheap-ass 4K TV upscale well enough to make it worth buying in this respect? And remember, you've still got other picture quality considerations such as motion, 3D crosstalk, smart features and contrast to think about.

We'll certainly get one of these Kogan TVs in and let you know how it performs, but for the time being, scepticism is the right approach and you'd be wise to keep your cash tucked away before splashing out.

Check out TV reviews on TechRadar