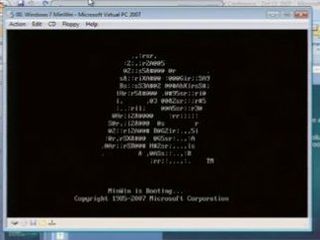 As the OS has no graphics engine, the boot screen just displayed an ASCII version of the Windows logo

Microsoft has demonstrated a new cut-down version of the Windows kernel that could change the way future versions of the operating system are developed.

The reason? What has been dubbed "Windows MinWin" takes up just 33MB of system memory. Currently it can only run within a host operating system, but the demo occurred during a speech segment on the post-Vista version of Windows, Windows 7.

The kernel is the core code that underlies the operating system, providing a basis for functions such as Windows services to run on top of.

Microsoft engineer Eric Traut was giving the lecture at the University of Illinois and certainly provided a swift left hook to those who believe that Windows is bloatware to the core. Traut said the development would help Microsoft "move into a lot of new areas".

MinWin doesn't have a graphical interface and was designed to show that a lot of the girth associated with Windows isn't actually necessary for a system to run. "The components that make up the very core of the operating system, [are] actually pretty streamlined," he said.

Windows could be even smaller

Windows Vista currently takes several gigabytes of install space, depending on the version of the OS that you have installed.

Traut added that the demo installation wasn't even as small as he'd have liked it to be. Variants the demonstration code have already been used in various Microsoft applications.

The video of the event has been posted online. Windows 7 will be launched in 2010, according to current Microsoft estimates.