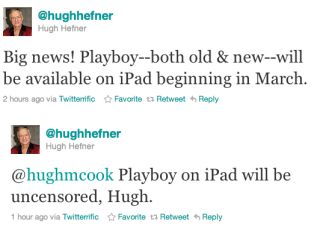 Can we believe the legendary Hugh Hefner?

Honestly, Steve Jobs turns his back for five seconds and Hugh Hefner sneaks an iPad version of Playboy through the iTunes approval system.

Or so it would seem given Hef's latest tweets on the matter, in which he claims: "Big news! Playboy - both old & new - will be available on iPad beginning in March."

In a reply to a follower eager to know just how much flesh will be on show, he also states, "Playboy on iPad will be uncensored."

Get your placards out

Apple has a history of censoring app content on its proprietary App Store, famously purging it of any vaguely sexy apps in a controversial move early last year.

Complaints prompted the prudish move, with women feeling degraded and objectified and parents citing concern about what their children had access to.

But it seems that bunnies hopping about in the altogether on the iPad's 9.7-inch screen is A-okay, just as the Playboy iPhone app survived the great purge of 2010.

Phil Schiller, Apple's head of worldwide product marketing, said that Playboy's app could remain in the App Store because it comes from "a well-known company with previously published material available broadly in a well-accepted format."