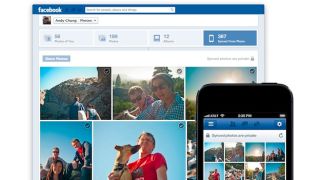 Now your photos will upload to Facebook instantly and privately

After a September reveal, Facebook officially launched its new Photo Sync feature for iOS and Android devices on Friday.

Though Photo Sync was tested by a select number of Android users for the past few months, and iOS for the past week or so, Facebook finally opened up the feature to the rest of its mobile users.

When enabled, Photo Sync will upload any and all pictures taken on a mobile device to a private, locked folder called "Synced from Phone" within Facebook.

For any iPhone and iPad users, Photo Sync will only work when the device is upgraded to iOS 6.

Photo Sync appears to work with any version of Android, as Facebook doesn't specify any requirements to use the feature on that particular OS.

Once a user agrees to allow photos to sync from a smartphone, the Facebook app immediately begins uploading the images (up to 2GB) to the website.

How often the device uploads images is entirely up to the user, though new photos taken will by synced as they are taken.

Users can also choose how to sync the photos (via WiFi, cellular network, or both), and can turn off the feature entirely and delete photos from the private folder at their discretion.

A prompt to "Get Started" will appear at the top of the Facebook feed in the app when the feature has rolled out to your market.