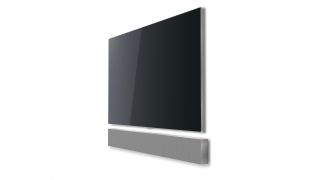 Over the years TVs have gone from massive hulking beasts to OLED displays that are as thin as a coin.

But speakers haven't gone through quite the same transition, leading to soundbars that dwarf the size of the TV they're attached to.

That's something that Samsung wants to fix with its upcoming NW7000 Sound+ soundbar, a 53.5mm-deep speaker that comes close to matching the thinness of modern televisions.

Big sound in a thin package

The soundbar comes packing three channels of sound and a built-in subwoofer, all packed into a chassis that Samsung claims is 41% thinner than its predecessor.

Perhaps understandably, given its size, the soundbar does not feature support for modern surround sound technologies such as Dolby Atmos and DTS:X.

We're reserving judgement on the soundbar until we hear it for ourselves. While TVs can be made thin without any impact to picture quality, speakers tend to benefit from having the space for nice big drivers.

Packing a speaker into a much smaller package will require some nifty engineering on Samsung's part.