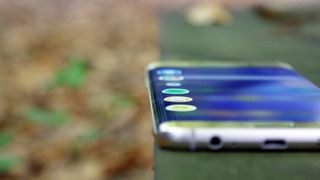 Apple and Samsung haven't just been fighting each other for customers these past few years – since April 2011 the two tech giants have been at loggerheads in the courtroom too, in dispute over patents.

The battle took a dramatic turn last year when a US court ordered Samsung to pay Apple an astonishing $1.049bn over claims that Samsung stole Apple's patents.

As you might imagine, Samsung put up a fight, and Foss Patents now reports that Samsung has managed to talk the judge down to a still-whopping $548m.

Samsung has apparently agreed to pay the cash, and instead now the legal dispute has descended into haggling over payment terms. For example, Samsung wants guarantees that if the courts changes its mind it can get a refund on the payment.

Beginning of the end?

So could this mean an end to the long-running dispute? It seems the companies are slowly getting there, as also last year the two agreed to drop all their patent lawsuits against each other that were being contested outside the US.

The payment will reportedly have to be made before December 14. We've no indication of how Samsung will transfer the cash to Apple, but we're guessing it won't be using Apple Pay.

The reason patents are so hotly contested is because it theoretically gives companies an exclusive right to pursue whatever ideas they've come up with. This is why companies will often patent the most absurdly obvious (such as "pull to refresh" on an email list) or weird (like this) thing.

This means that if someone else later produces products that use the patented technology, the company that filed the patent can take them to court and get a nice big fat payout – even if they themselves haven't made the product.