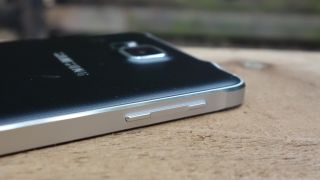 RIP for the Alpha dog?

It's not a great start to 2015 for fans of the premium-looking, metal-banded Galaxy Alpha: rumours from inside the industry suggest Samsung is abandoning production of the handset in order to focus on devices that are a touch more affordable.

The Galaxy Alpha was a refreshing departure for Samsung in the way that it prioritised attractive looks over spec-list box ticking, though on the back of apparently so-so sales it may have been a departure too far, according to ET News.

But there's hope yet for those who prefer metal edging over plastic — it looks like the internal specs will bear the brunt of Samsung's cost-cutting rather than the external finish. The new Galaxy A5 is sporting a Snapdragon 410 chipset rather than the Exynos 5 Octa of the Alpha.

If looks could kill

At the same time, the A5 keeps the head-turning looks introduced by the Alpha, even if it is on the cheaper side. A 720p 5-inch HD super AMOLED display, 2GB of RAM, 13-megapixel rear camera and 5-mega pixel front camera feature on the phone, which has already launched in China.

If you're in the market for a top-end phone and like the look of the Alpha then we'd advise you to get your order in sharpish. We've asked Samsung for an official comment, and we'll update as we hear more.