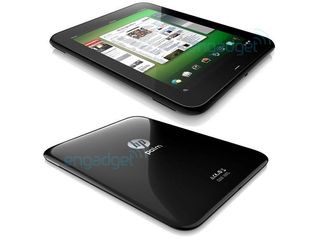 UPDATE: Check out our Hands on: HP TouchPad review

The first pictures of the forthcoming Palm-powered tablet range have emerged, courtesy of a tipster to Engadget.

The first is codenamed Topaz and will be the 9-inch variant, while the Opal will be its 7-inch little brother.

As you can see, HP also sees the tablet market as slightly segmented between those that want the larger-screened experience, and those that want to be able to hold a tablet (sort of) easily in one hand.

Both will be running a single-core 1.2GHz processor, according to Engadget's tipster, and will be shipping to Palm in June ready for a launch later this year.

Normally this would mean a Q3 release date, and it may well be for the US - but given Palm's relative anonymity these days in the UK, don't be surprised if these don't land until 2012 by which time the likes of Motorola and Apple could be on their second and third tablet iterations.

HP has lent more than just a slight air of credibility to the rumours with a new advert, stating 'Think you saw the latest on Engadget? Think again' on an invite to a 9 February WebOS announcement - which either means there's more to come or the pictures themselves are wrong.

Either way, we're highly intrigued to see what this new announcement will be - especially as we're expecting an iPad 2 to surface in the next few months.