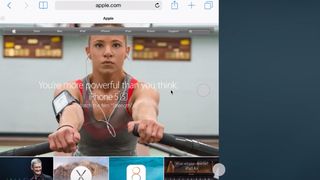 Apple didn't give any details of its rumoured split-screen iPad feature at WWDC last week, so someone dug into iOS 8 and found it anyway.

Now that same developer has managed to get the feature working by hacking the iOS 8 iPad Simulator and has published his discovery online for all to see.

Assuming Apple decided to roll it out eventually, the feature will allow us to split the screen using a two-finger slide. Depending on how far across you push that screen, it'll shrink down to either three quarter-size, half-size, or quarter-size.

Right now it's doesn't look too clean, but obviously it's still in beta so we wouldn't expect a polished product.

It's unknown whether Apple will make its split-screen mode available with iOS 8 later this year, however we'd say the signs are good.

And after all, it's something that's currently feature on Microsoft's Surface tablets, so Apple really needs to catch up. Check it out in action below.