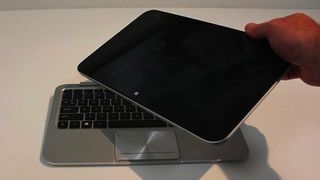 Will HP go full-tablet with Android?

Hewlett Packard is reportedly working on a new bid for the mobile marketplace, and is barking up the Android tree to do it.

ReadWrite reported Wednesday that HP has been developing a new Android-powered tablet since before last Thanksgiving (Nov. 22, 2012), and is preparing to unveil the device before long, citing two unnamed sources familiar with the plans.

HP is reportedly going all-out with its Android tablet, aiming for a high-end device of unspecified size that will make use of NVIDIA's impressive Tegra 4 chip.

While last year HP released the Envy x2 tablet/notebook hybrid with Windows 8, the company mostly shied away from pure tablets since the fall of webOS and its own TouchPad line.

The Verge also claims to have confirmation that HP has chosen Android to power some slates from its own anonymous source.

HP on board with an Android tablet could be a big win for Google, after last year looked like the PC manufacturer was favoring Windows 8 for its future slates.

Then again, HP is fairly late to the party where mobile devices are concerned, so it's questionable how much impact an HP Android tablet will actually have on the market.

According to the report, HP's Android adoption also extends to the company's smartphone plans, though that includes the caveat that no HP smartphone will arrive before the end of the year.

HP is reportedly holding some behind-the-scenes MWC 2013 meetings in just a few weeks, so you can be sure TechRadar will keep an ear to the ground for any Android tablet and smartphone news from the PC maker.