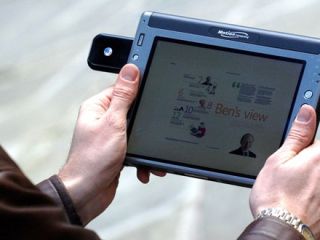 BT's research arm has developed a laptop technology that enables you to control the machine by movement - just like the Nintendo Wii remote. The device, called Balance, is more Etch-a-Sketch than bone fide laptop, but it's still remarkably clever.

Inside the diminutive PC is a set of motion sensors that control certain Windows functions with the help of special software.

Technology used in the Balance prototype could be used in the future to help people who can't use traditional input methods because of reduced movement or disability. The method also removes the need for tiny unusable keyboards, which only the few find a good user experience.

Different actions can also be programmed into the software. So you could move in different directions to change cursor movements or rapidly move the tablet upwards to open the selected file - that kind of thing.