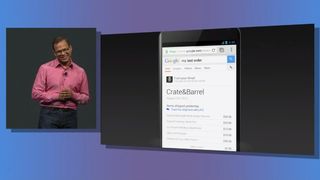 Google announced the rather stark "end of search as we know it" at its annual Google IO conference today.

Really, the search engine giant is looking to change the way users go about finding information through its various Google services.

Namely, this applies to the Google knowledge graph and Google Now, which are expanding with a credo the company labeled "answer, converse and anticipate."

Answering your next question

Google's knowledge graph has the basics down, as Amit Singhal, the company's senior vice president and software engineer, demonstrated on the Google IO stage.

Asking the search engine for basic information like the release date of Star Trek: Into Darkness movie and the population of India returned the relevant answers.

He showed that this information will be supplemented by predicting what a user's next question might be based on what others have searched.

"Starting today, we will be anticipating your next question, which may very well be how does [India's population] compare to the population of other countries?"

The comparison behind him showed a graph with the U.S. and China's populations above and below the line that represented the 1.21 billion people in India.

Searching doesn't have to be a lonely experience, as Google previewed its search engine with a conversational, voice-only approach on Chrome and Chrome OS.

The feature rids the need to push a button and allows users to simply say, "OK, Google," to prompt Google to pull up answers to any and all burning questions.

The idea is that people don't talk in keywords, so allowing search to recognize casual speech is an evolution of the search system.

Google's ability to interpret casual speech is where the company's "anticipate" experience comes into play.

While traditional search typically relies heavily on keywords, the future of Google's core business will attempt to define "it."

For example, with as little information as "how far is it from here," voice search can collaborate distance and directions with current traffic conditions highlighted as well.

The most concrete example came during an onstage demo, in which Google highlighted Now's ability to pull up handy, need-it-now information about particular places and things - how tall someone has to be to ride a roller coaster, dinner reservation reminders, and package tracking information.

Google won't talk back just yet

Talking to your search engine as you bend in anticipation of an answer may still have an air of the absurd about it, but probably not for very much longer.

Google said that its conversational "OK, Google" concept is "coming soon" to Chrome OS and the Chrome browser on PCs, Mac and Linux.

In the meantime, the Google Now desktop functionality and the expansion of the Google knowledge graph are rolling out to users starting today.

Additionally, Google's instant answers, which were made available in nine languages last year, will come to people who search in Polish, Turkish, Simplified Chinese and Traditional Chinese are on the way now.